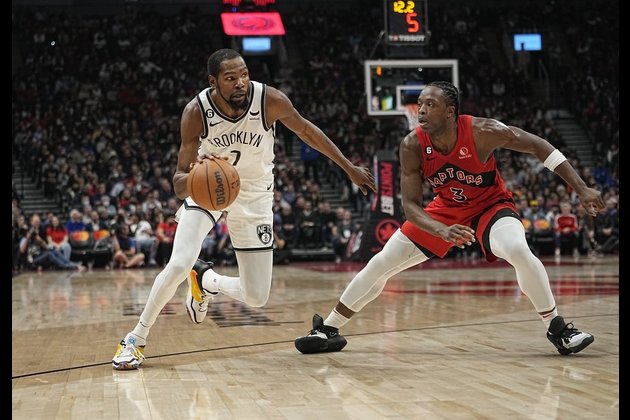 Kyrie Irving scored 19 of his 29 points in the third quarter and the visiting Brooklyn Nets defeated the injury-depleted Toronto Raptors 112-98 Wednesday night.

Royce O'Neale added 15 points and seven assists for the Nets, who were coming off a road loss to the Philadelphia 76ers on Tuesday after winning two in a row.

Gary Trent Jr. scored 19 points for the Raptors, who have lost two in a row. O.G. Anunoby added 15 points, Chris Boucher had 12 points and 16 rebounds but shot just 2-for-15 from the field. Thaddeus Young had 12 points, eight rebounds and five assists, Juancho Hernangomez had 10 points and 10 rebounds and Jeff Dowtin Jr. chipped in with 10 points.

Brooklyn took a 15-point lead into the fourth quarter after outscoring Toronto 39-25 in the third quarter.

O'Neale's 3-pointer bumped Brooklyn's lead to 19 points with 9:33 to play in the fourth quarter. Irving hit a 3-pointer with 4:42 to play to increase the margin to 20 points.

Brooklyn led 38-26 after one quarter after being ahead by as many as 15 points.

Trent had 14 first-half points and Anunoby had 13. Durant and O'Neale each had nine points for Brooklyn.

Brooklyn used a 10-0 run finished by Simmons's dunk to lead by 13 points with 8:16 left in the third quarter. The lead reached 17 on Claxton's dunk with 5:24 left. Brooklyn led 91-76 after Young completed the third-quarter scoring with a layup.

WASHINGTON D.C.: The White House said the administration of President Joe Biden is considering a proposal from Republican leader Kevin ...

WASHINGTON D.C.: In a case that Supreme Court liberal justices said could empower certain businesses to discriminate based on constitutional ...

MOSCOW, Russia: Russian officials have said that some 2,500 Caspian seals have been found dead on the Caspian Sea coast ...

Indonesia to outlaw sex outside marriage

JAKARTA, Indonesia: In a legal overhaul that critics say could curb freedoms and police morality in the world's third-largest democracy, ...

Hawaii braces for eruption on Big Island of Honolulu

HONOLULU, Hawaii: Officials are concerned that a major eruption of the Mauna Loa volcano on the Big Island of Hawaii ...

LONDON, England: While a new conflict with airports erupted this week over rising air fares and ground charges, still, international ...

NEW YORK, New York - U.S. stocks made tepid rises on Friday before succumbing to a wave of selling late ...

After decades of development, humanoid robots ready to be rolled out

MONTREAL, Canada: Data released this week showed that Canada's exports rose in October, mainly driven by pharmaceutical products and the ...

LONDON, England: As the governments of major economies are funding the development of green fuels to decarbonize, BP chief executive ...

NEW YORK, New York - U.S. stocks were bought up on Thursday, with all the major indices finishing with appreciable ...