Mr. Friedland commented: 'After more than five years of property acquisition, digitization of old mine records and meticulous geologic mapping, we are beginning our exploration drill program as a newly public company at our Tintic Copper-Gold project in Utah. The Tintic Mining District has a storied, century-and--half-long history of high-grade silver, gold and copper production, dating back to the first discovery in 1869.'

'Our high-powered, proprietary TyphoonTM induced polarization surveying system and Computational Geoscience Inc. software has delineated multiple large-scale anomalies comparable in size to the world-class Bingham Canyon porphyry copper-gold mine. Bingham Canyon has been producing continuously since 1906 and is commonly considered to be one of the world's largest producers of copper and gold. With the help of TyphoonTM, we are looking forward to better understanding the potential porphyry sources to the historical high-grade precious and base metals mineralization at Tintic.'

The Tintic District lies on a parallel geological trend, located approximately 40 miles (64 kilometers) south of Rio Tinto's world-class Bingham Canyon porphyry copper-gold mine. The District contains intrusions of similar age and composition to those at Bingham Canyon, and highly favorable carbonate host rocks containing most of the historic precious and base metals.

Click on the image below for the high-resolution video. 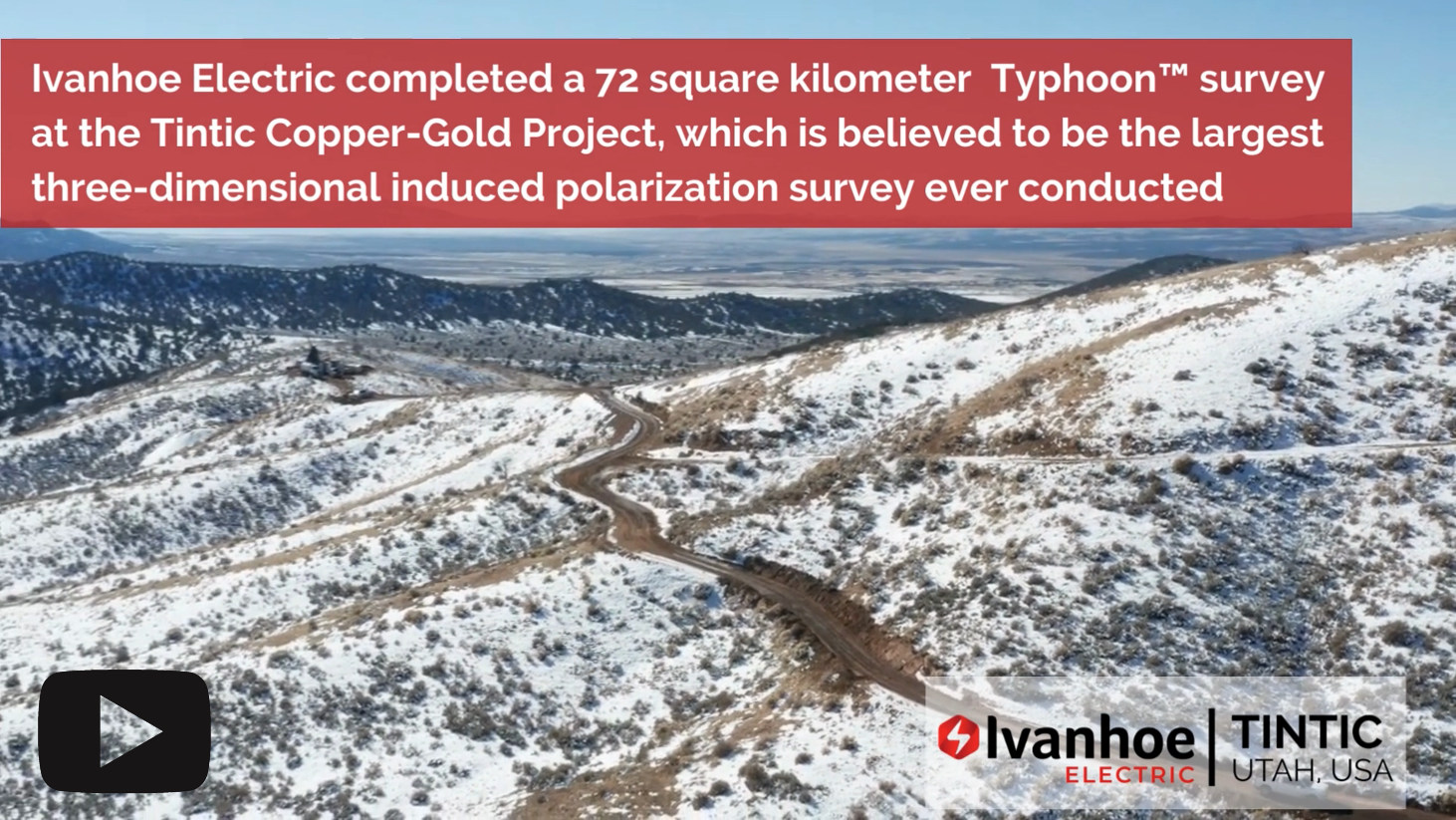 The very first mining claims in the Tintic District were staked in 1869 at Sunbeam, with production at the Sunbeam mine beginning shortly thereafter. While mining began in 1870, much of the early high-grade bonanza production history went unrecorded. However, starting in 1901, the U.S. Bureau of Mines recorded production of 1.9 million ounces of gold, 136 million ounces of silver, 105,000 tonnes of copper, 416,000 tonnes of lead and 6,000 tonnes of zinc from over 30 different historic mines situated on Ivanhoe Electric's property.

Mines including the Centennial Eureka, Mammoth, Bullion Beck, Grand Central, Gold Chain, Dragon, Rabbit's Foot, and Lucky Boy produced high-grade copper, gold, silver, lead and zinc from the surface down to the water table. In the Tintic District, the water table ranges from depths of 300 feet (91 meters) to 2,600 feet (792 meters), depending on location. Very little mining occurred below the water table due to the antiquated pumping technology, though mineralization is known to continue in many of the historic mines. Ivanhoe Electric's geologists interpret the high-grade mineralization in the Tintic District as shallow expressions of one or more porphyry copper-gold systems at depth.

The core of Ivanhoe Electric's land package was assembled by Dr. Spenst Hansen, PhD., a Utah native and an experienced geologist and mining engineer. Over a period of several decades, Dr. Hansen acquired numerous properties and preserved many historic mine maps and reports which were made available to Ivanhoe Electric. Dr. Hansen's long-time experience in the Tintic District has assisted Ivanhoe Electric in consolidating a large acreage of privately-owned mining claims and mineral leases. Ivanhoe Electric began acquiring property in 2017 and has since concluded more than 20 land deals with multiple vendors to assemble our current land position totaling 16,000 acres (65km2).

Our 2022 drill program has started in an area with good access during the winter months, using a track mounted diamond drill rig from Major Drilling America of Salt Lake City, Utah. After collaring the hole, the drill rig encountered mechanical issues and is expected to resume drilling operations as soon as possible.

Initial exploration drilling will investigate the near-surface, historically mined, high-grade copper, gold and silver mineralization. Drill holes will continue to depth to test for the evidence of a potential porphyry copper-gold deposit as guided by multiple geological indications and by our proprietary Typhoon™ dataset. Ivanhoe Electric expects to execute a more extensive drilling campaign at Tintic during the Spring of 2023. 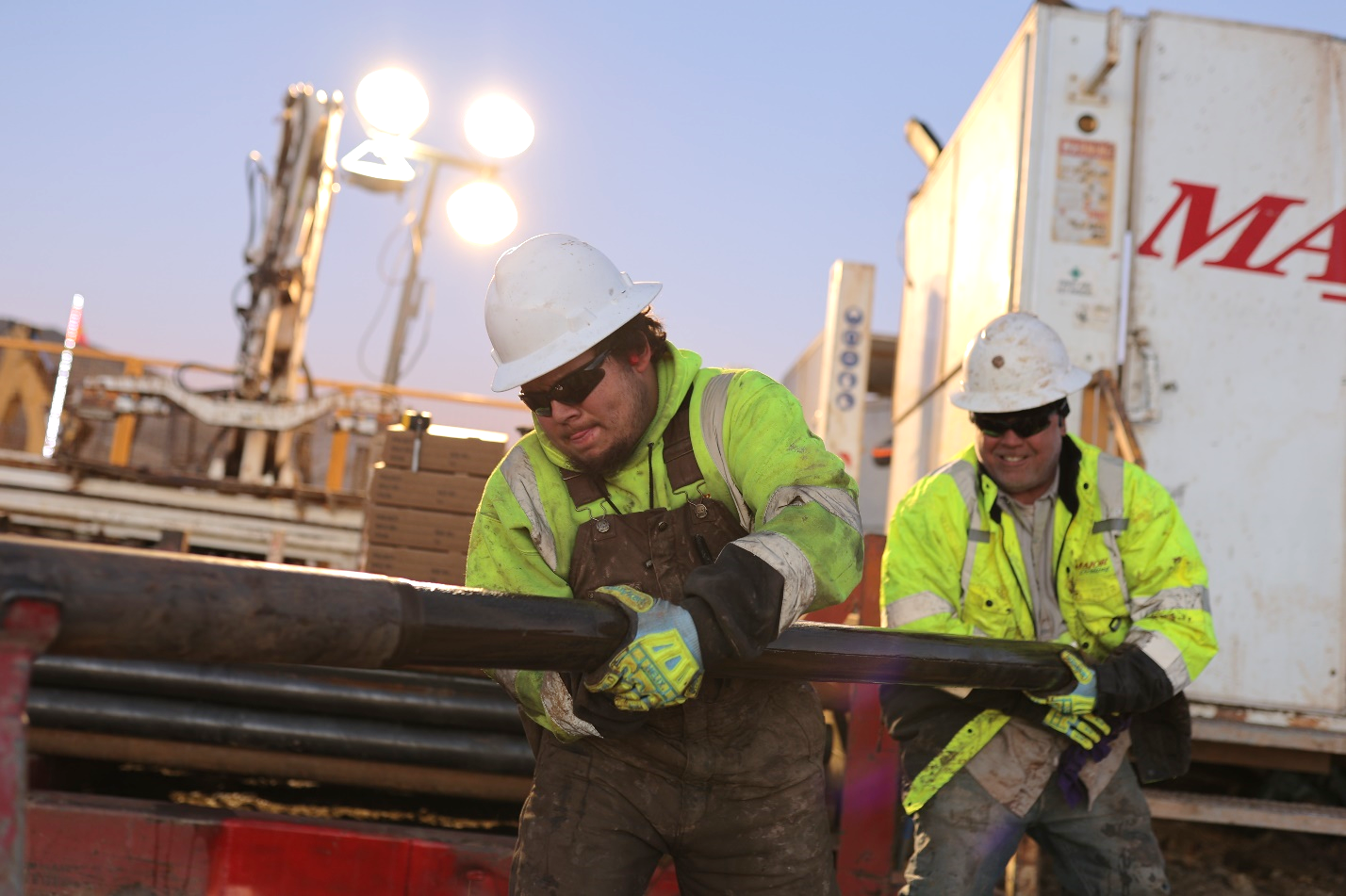 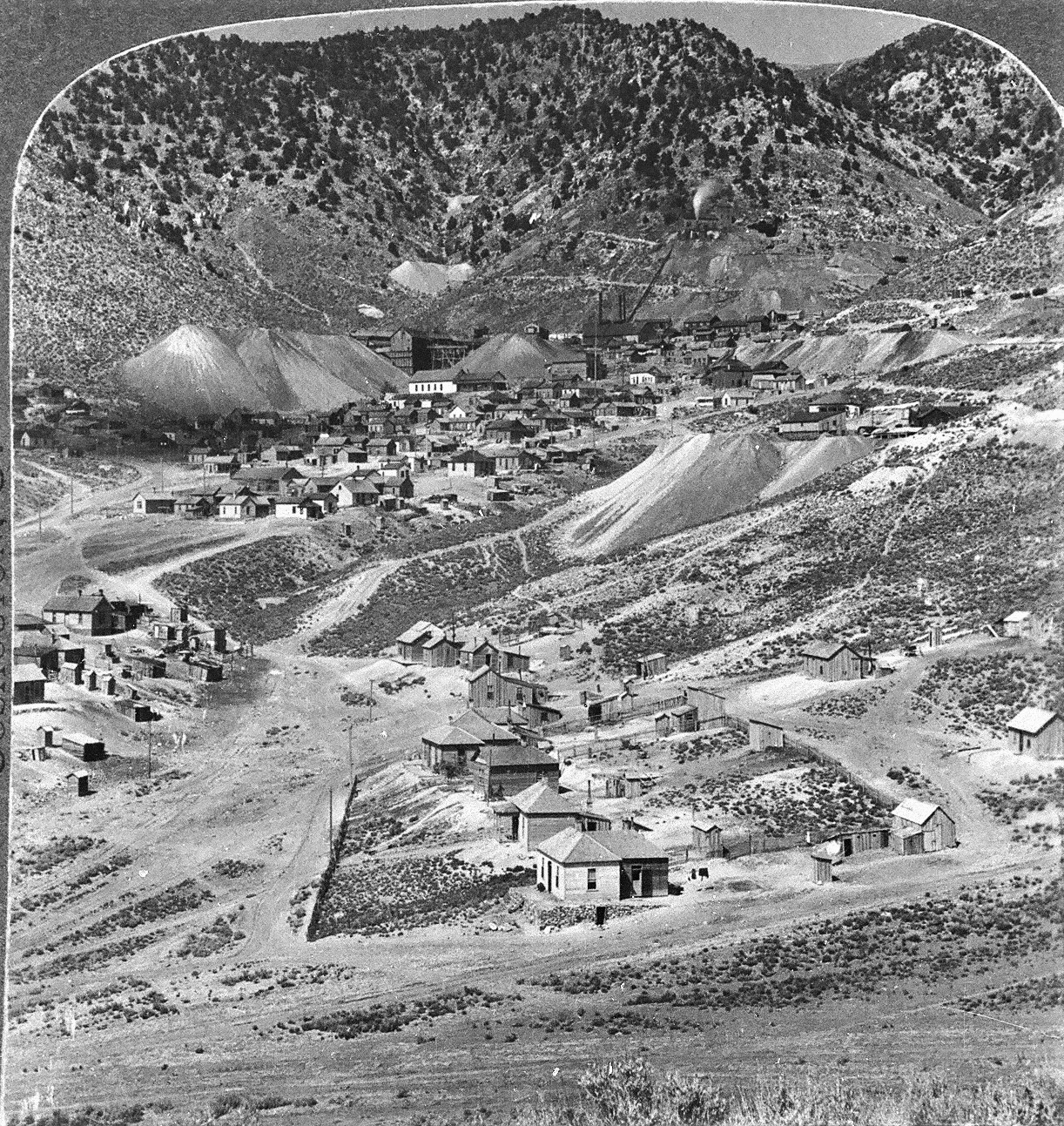 Birdseye view of Upper and Lower Mammoth, circa 1898

Workers at Ajax Mine Mammoth, circa early 1900s 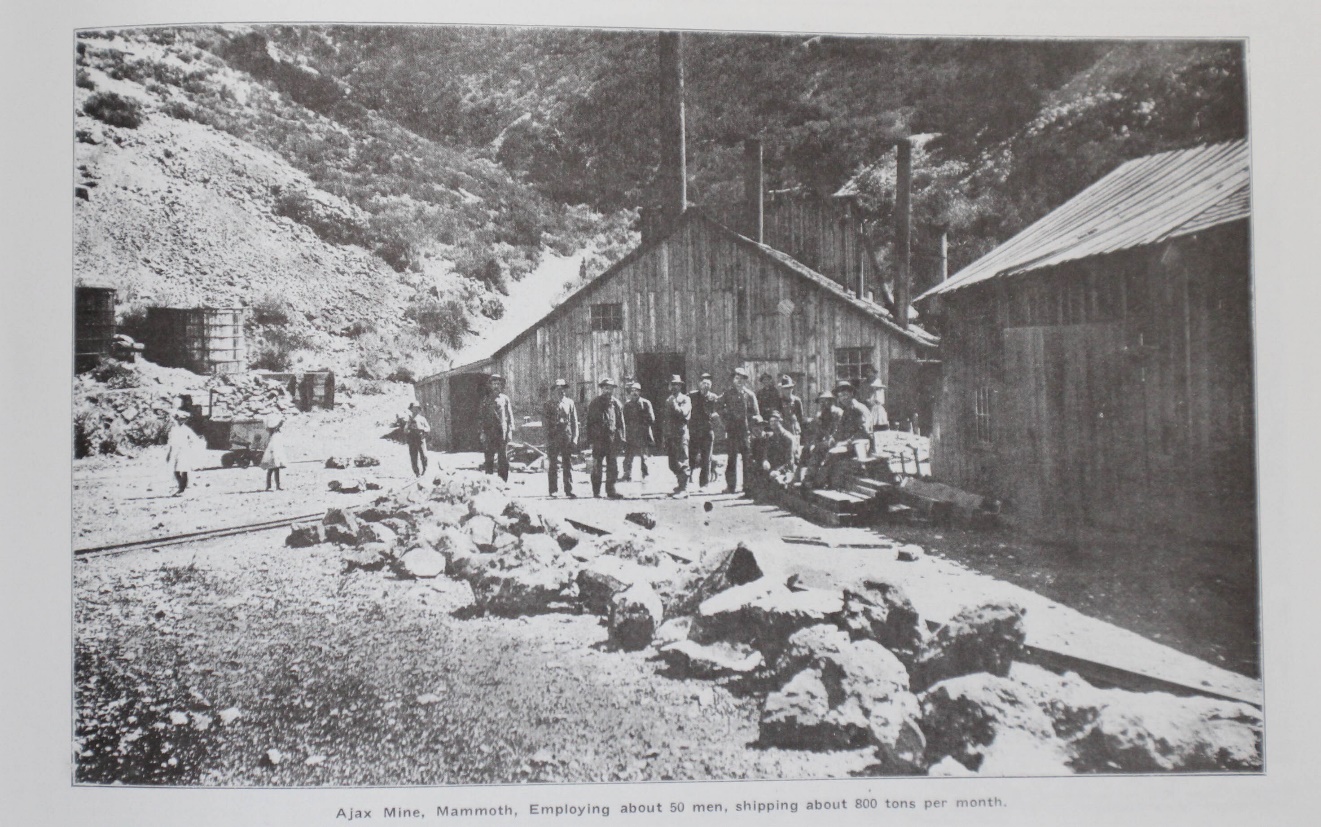 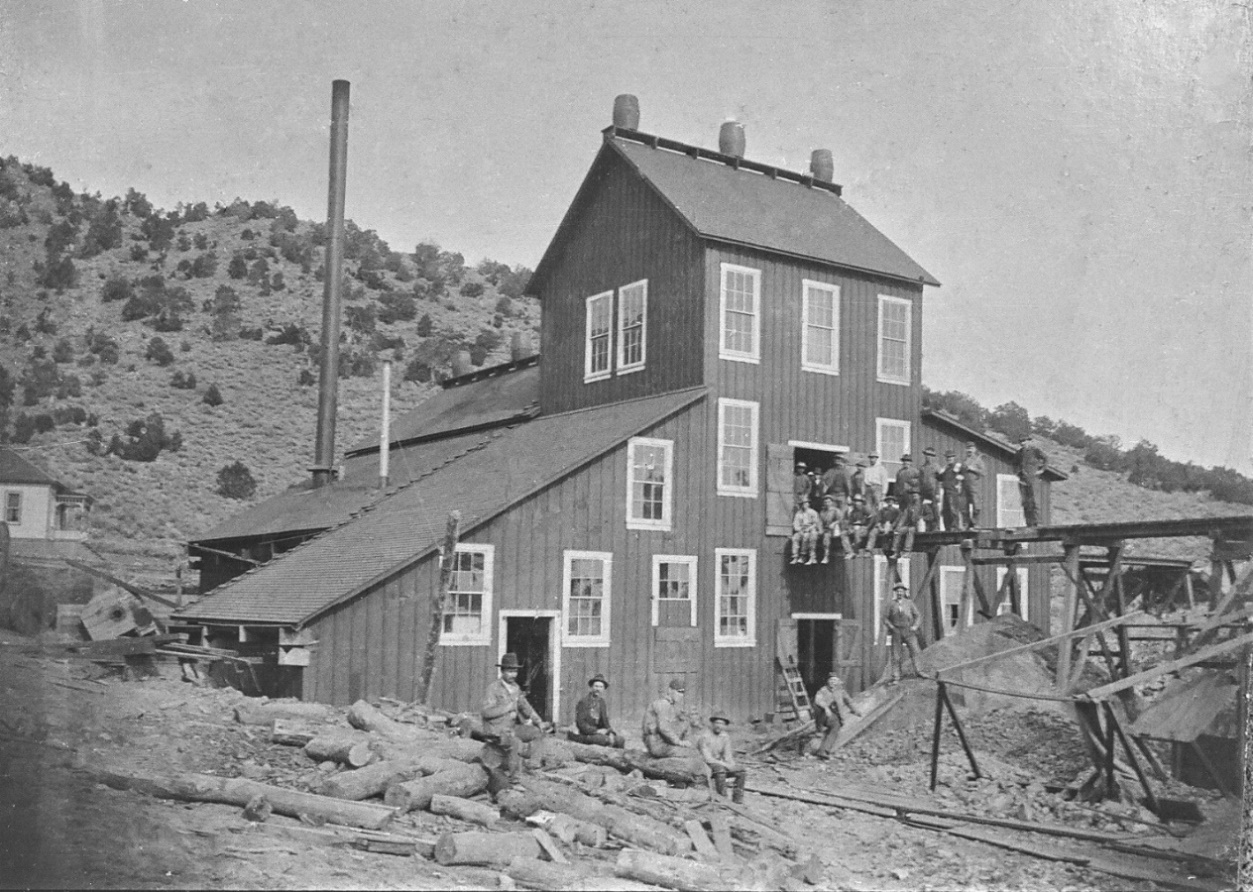 Locals joining a parade in Eureka, circa 1910s 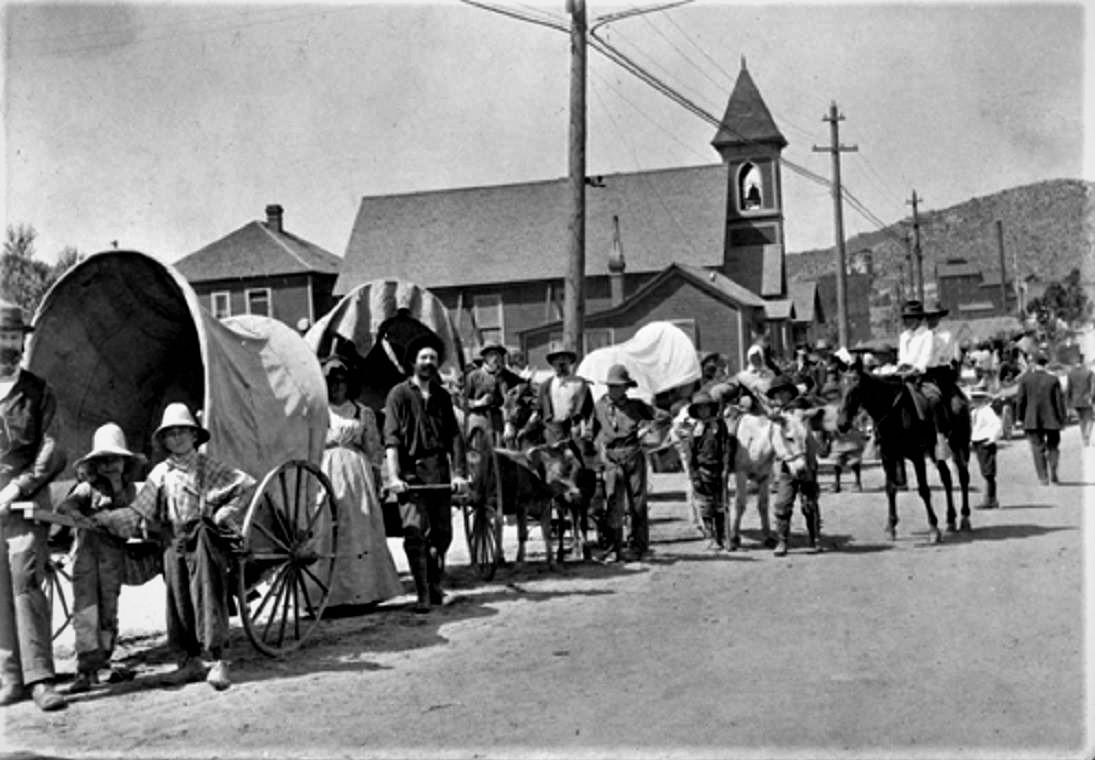 Qualified Persons
Disclosures of a scientific or technical nature included in this news release, including the sampling, analytical and technical data underlying the information, have been reviewed, verified, and approved by Charles N. Forster, P.Geo., a Qualified Person as defined by Regulation S-K, Subpart 1300 promulgated by the U.S. Securities and Exchange Commission and by Canadian National Instrument 43-101. Mr. Forster is an employee of Ivanhoe Electric.

About Ivanhoe Electric
Ivanhoe Electric is an American technology and mineral exploration company that is re-inventing mining for the electrification of everything by combining advanced mineral exploration technologies, renewable energy storage solutions and electric metals projects predominantly located in the United States. Ivanhoe Electric uses its Typhoon™ transmitter, an accurate and powerful geophysical survey system, together with advanced data analytics provided by its subsidiary, Computational Geosciences, to accelerate and de-risk the mineral exploration process as well as to potentially discover deposits of critical metals that may otherwise be undetectable by traditional exploration technologies. Through its controlling interest in VRB Energy, Ivanhoe Electric also develops and manufactures advanced grid-scale vanadium redox battery storage systems. Finally, through advancing its portfolio of electric metals projects located primarily in the United States, headlined by the Santa Cruz Copper Project in Arizona and the Tintic Copper-Gold Project in Utah, as well as projects in Montana, Oregon and North Carolina, Ivanhoe Electric is also well positioned to support American supply chain independence by delivering the critical metals necessary for electrification of the economy.

Forward-Looking Statements
Certain statements in this news release constitute 'forward-looking statements' or 'forward-looking information' within the meaning of applicable U.S. and Canadian securities laws. Such statements and information involve known and unknown risks, uncertainties and other factors that may cause the actual results, performance or achievements of the company, its projects, or industry results, to be materially different from any future results, performance or achievements expressed or implied by such forward-looking statements or information. Such statements can be identified by the use of words such as 'may', 'would', 'could', 'will', 'intend', 'expect', 'believe', 'plan', 'anticipate', 'estimate', 'scheduled', 'forecast', 'predict' and other similar terminology, or state that certain actions, events or results 'may', 'could', 'would', 'might' or 'will' be taken, occur or be achieved. These statements reflect the company's current expectations regarding future events, performance and results and speak only as of the date of this news release.

Forward-looking statements are based on management's beliefs and assumptions and on information currently available to management. Such statements are subject to significant risks and uncertainties, and actual results may differ materially from those expressed or implied in the forward-looking statements due to various factors, including changes in the prices of copper or other metals Ivanhoe Electric is exploring for; the results of drilling and exploration activities and/or the failure of exploration programs or studies to deliver anticipated results or results that would justify and support continued exploration, studies, development or operations; the significant risk and hazards associated with any future mining operations, extensive regulation by the U.S. government as well as local governments; changes in laws, rules or regulations, or their enforcement by applicable authorities; the failure of parties to fulfill contracts with the company or to perform as agreed; and the impact of political, economic and other uncertainties associated with operating in foreign countries, and the impact of the COVID-19 pandemic and the global economy. These factors should not be construed as exhaustive and should be read in conjunction with the other cautionary statements described in Ivanhoe Electric's registration statement on Form S-1, as amended, filed with the U.S. Securities and Exchange Commission and base PREP prospectus filed with Canadian securities commissions.

WASHINGTON D.C.: The White House said the administration of President Joe Biden is considering a proposal from Republican leader Kevin ...

WASHINGTON D.C.: In a case that Supreme Court liberal justices said could empower certain businesses to discriminate based on constitutional ...

MOSCOW, Russia: Russian officials have said that some 2,500 Caspian seals have been found dead on the Caspian Sea coast ...

Indonesia to outlaw sex outside marriage

JAKARTA, Indonesia: In a legal overhaul that critics say could curb freedoms and police morality in the world's third-largest democracy, ...

Hawaii braces for eruption on Big Island of Honolulu

HONOLULU, Hawaii: Officials are concerned that a major eruption of the Mauna Loa volcano on the Big Island of Hawaii ...

LONDON, England: While a new conflict with airports erupted this week over rising air fares and ground charges, still, international ...

NEW YORK, New York - U.S. stocks made tepid rises on Friday before succumbing to a wave of selling late ...

After decades of development, humanoid robots ready to be rolled out

MONTREAL, Canada: Data released this week showed that Canada's exports rose in October, mainly driven by pharmaceutical products and the ...

LONDON, England: As the governments of major economies are funding the development of green fuels to decarbonize, BP chief executive ...

NEW YORK, New York - U.S. stocks were bought up on Thursday, with all the major indices finishing with appreciable ...