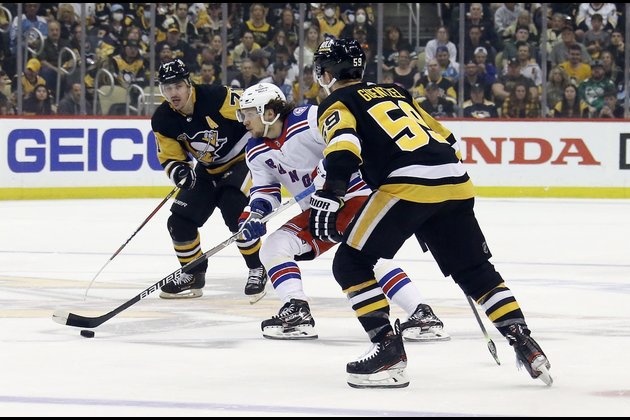 Chris Kreider's second goal of the night was the tiebreaker with 1:28 left in the third period Friday as the visiting New York Rangers topped the Pittsburgh Penguins 5-3 to set up a Game 7 in their first-round Eastern Conference playoff series.

Kreider's slapshot from the left point popped off of and over goaltender Louis Domingue to break a 3-3 tie. Andrew Copp added an empty-netter with 26.4 seconds left, completing New York's rally from a 2-0 deficit on the night.

Mika Zibanejad had two goals and two assists while Adam Fox had four assists for the Rangers, who have won two straight to even the series.

New York goaltender Igor Shesterkin made 31 saves and picked up an assist.

Jeff Carter, Bryan Rust and Evgeni Malkin scored for the Penguins, and Domingue made 33 saves.

Game 7 is scheduled for Sunday in New York.

The Penguins then lost forward Brian Boyle, who left late in the first after he hit Trouba.

Carter opened the scoring at 14:12 of the first. After Kasperi Kapanen's sharp-angle shot, Carter backhanded in the rebound.

Pittsburgh pushed it to 2-0 when Rust scored 1:36 later. From the bottom of the left circle, Rust one-timed a cross-ice pass from Jake Guentzel inside the near post.

In the second, New York scored three unanswered goals, the first two by Zibanejad to tie it.

At 5:05 and just five seconds into a power play, Zibanejad blasted a shot short side from the top of the right circle to make it 2-1, and 1:16 later, he scored on a one-timer past a screen to knot it 2-2.

Shesterkin's long outlet pass to Zibanejad led to a go-ahead goal. As Domingue got his glove on Zibanejad's shot but didn't hold on, Kreider was spinning away from Penguins defenseman Marcus Pettersson above the crease and swept the rebound in at 13:48 of the second.

Malkin tied it 3-3 at 16:36 of the second. He poked a pass from Trouba intended for K'Andre Miller near the blue line for a long breakaway with Miller closely chasing. Malkin beat Shesterkin under his glove.

WASHINGTON D.C.: The U.S. State Department has announced the launch of a new program to capture and analyze evidence of ...

Popularity of Indonesian president sinks due to price rises

EAST JAVA, Indonesia: A tourist bus crashed into a billboard on a highway on Indonesia's main island of Java this ...

BELGRADE, Serbia: Belgrade was paralyzed this week by a series of bomb threats, including against schools, bridges, restaurants and a ...

WASHINGTON D.C.: In a tweet this week, Amazon founder Jeff Bezos criticized President Joe Biden for the second time in ...

As food prices rise, Iranians take to the streets to protest

TEHRAN, Iran: According to social media posts, protests that began last week across Iran over a reduction in state subsidies ...

Face masks return for workers at some Michigan auto factories

SYDNEY, NSW, Australia - Stocks in Asia mostly sank on Thursday, following on from a rout on Wall Street overnight."There ...

LONDON, England: Israeli startup REE Automotive has announced that it will build an assembly plant for electric vehicles (EVs) in ...