Brewers edge Mets, one game away from NL Central crown 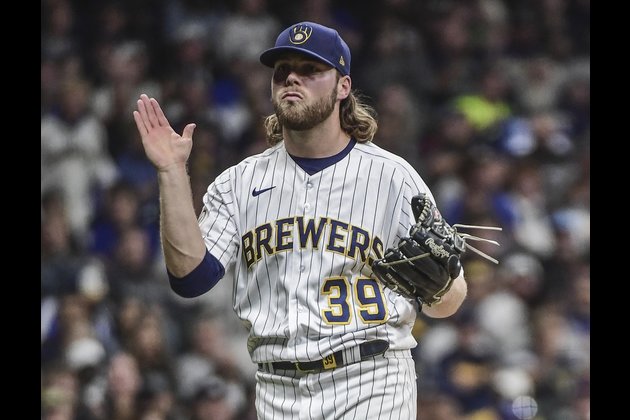 Corbin Burnes bolstered his National League Cy Young candidacy by tossing seven strong innings Saturday night, when he earned the victory as the Milwaukee Brewers cut their magic number for winning the NL Central to one by edging the visiting New York Mets, 2-1.

Eduardo Escobar delivered a two-run single in the third inning for the Brewers (93-62), who can clinch the fourth full-season division title in franchise history with a win in Sunday's series finale or a loss by the St. Louis Cardinals, who have won 15 straight.

The loss was the fourth straight and 12th in 15 games for the Mets (73-81), who were eliminated from playoff contention prior to first pitch due to the Philadelphia Phillies' 3-0 win over the Pittsburgh Pirates. New York was in first place in the NL East for 114 days.

Burnes (11-4) allowed one run on five hits and one walk while striking out nine as he extended his unbeaten streak to 19 starts. He is 9-0 with a 2.13 ERA in that span.

The solid outing Saturday lowered Burnes overall ERA to 2.29, which leaves him just behind the Los Angeles Dodgers' Max Scherzer (2.28) for the major league lead. Burnes also ranks fifth in the majors with 230 strikeouts.

The Brewers scored their runs Saturday before Burnes allowed a baserunner. In the third, Willy Adames and Avisail Garcia drew back-to-back one-out walks against Rich Hill (6-8). The runners advanced a base apiece on a comebacker by Christian Yelich before Escobar singled on a 2-2 pitch.

Burnes, who combined with Josh Hader on the Brewers' second-ever no-hitter on Sept. 11, retired the first nine batters before Brandon Nimmo led off the fourth with a single. Nimmo was caught stealing for the second out of the inning before Michael Conforto doubled and Pete Alonso walked. Javier Baez followed with an RBI single.

Hill and Nimmo hit consecutive two-out singles in the fifth before Burnes retired the final seven batters. Brad Boxberger tossed a one-hit eighth and Hader earned his 34th save by working around a two-out walk in the ninth.

Hill, who is winless in 12 games (11 starts) with the Mets, allowed the two runs on two hits and four walks while striking out six over five innings.