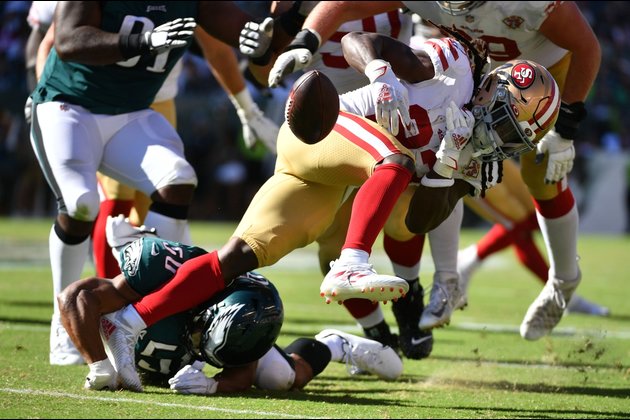 The San Francisco 49ers promoted Kerryon Johnson from the practice squad to the active roster on Saturday and placed fellow running back JaMycal Hasty on injured reserve.

Johnson, who joined the 49ers on Sept. 14, has been summoned as the club attempts to piece together its backfield for Sunday night's game against the visiting Green Bay Packers (1-1).

Trey Sermon, Trenton Cannon and Jacques Patrick also are in line to play for San Francisco (2-0), while rookie Elijah Mitchell is listed as doubtful with a shoulder injury.

Johnson, 24, had 52 rushes for 181 yards and two touchdowns in 16 games (two starts) last season with the Detroit Lions. He has rushed for 1,225 yards and eight touchdowns and added 61 catches for 527 yards and three scores in 34 career games with the Lions.

Hasty, 25, sustained a high ankle sprain during the fourth quarter of Sunday's 17-11 road win over the Philadelphia Eagles.

The injury to Hasty came one week after starter Raheem Mostert was lost to a season-ending knee injury.

Hasty gained 38 yards on five rushes and made four catches for 21 yards.

Mitchell and Sermon (concussion) were also hurt against the Eagles but Sermon has cleared the protocol.