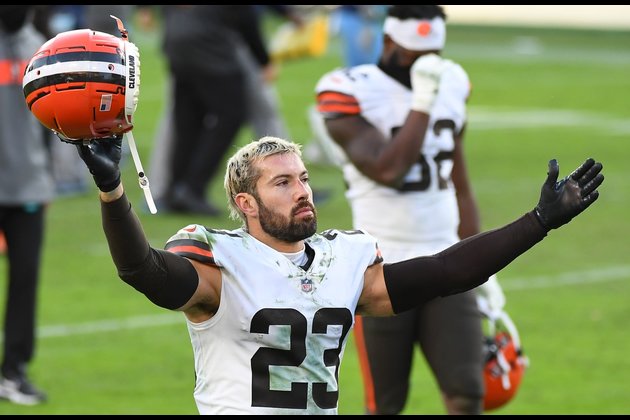 Undrafted out of Rice, Sendejo found a home with the Vikings and eventually became a starter for them at both free safety and strong safety. Over the course of 99 games (60 starts) with Minnesota, he grabbed eight of his nine career interceptions, recovered three fumbles and tallied 370 tackles.

He signed a one-year contract with the Browns last season and started 14 games for them, but was not brought back in 2021.

Wilcox was a seventh-round draft pick of the Tampa Bay Buccaneers in April and failed to make their initial 53-man roster. The Colts signed him off waivers Sept. 1, but the BYU product did not play in Week 1's home loss to the Seattle Seahawks.

Davis was elevated from the practice squad to play in Week 1 for Indianapolis. He spent his first five seasons with the Pittsburgh Steelers, making 42 starts and recording five picks.

On September 15, 2021, the heads of government of Australia, the United Kingdom, and the United States announced the formation ...

WASHINGTON D.C.: In a move that highlighted the Biden administration's frustration, the U.S. this week added Guatemala Attorney-General Consuelo Porras ...

WASHINGTON D.C.: Tigers and lions at the Smithsonian's National Zoo in Washington, which were infected last week with COVID-19, are ...

At auction, first printing of U.S. Constitution could see $20 million

NEW YORK CITY, New York: Auction house Sotheby's announced that it will auction a rare first-edition printed copy of the ...

MANILA, Philippines: Boxing legend Manny Pacquiao has announced that he will run for president of the Philippines next year, criticizing ...

WASHINGTON, D.C.: Cracking the whip against Big Tech companies, such as Facebook and Google, a bipartisan group of U.S. state ...

NEW YORK, New York - Stocks in the United States rallied on Thursday."This is a follow-on rally from a very ...

NAIROBI, Kenya: Netflix is offering viewers in Kenya a no-charge option, with one-fourth of the content platform's television shows and ...

AMSTERDAM, Netherlands: Royal Dutch Shell has made a major commitment to manufacture low carbon emissions aviation fuel over the next ...

SYDNEY, NSW, Australia - Stocks in Asia forged ahead on Thursday as fears over an imminent collapse of China's largest ...

The Island of Dr. Moreau