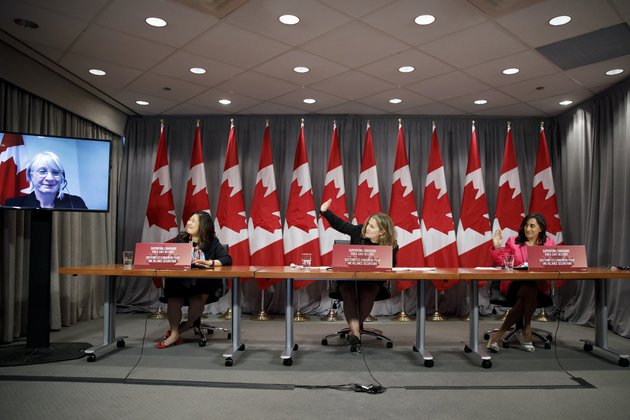 With Chrystia Freeland now holding the reins of the ministry of finance and Canada's post-pandemic recovery plan, it's time to ask whether the first woman - and feminist - to lead the portfolio will push for significant advances for gender equality.

Freeland was appointed finance minister in August 2020 after Bill Morneau's swift departure, marking the first time in Canadian history that a woman has landed the job. The daughter of a feminist activist from northern Alberta, Freeland is also an avowed feminist herself - and so is her boss, Prime Minister Justin Trudeau.

In her past role as foreign affairs and international trade minister, Freeland supported feminist policies like Canada's Feminist International Assistance Policy. She has now envisioned a "green and equitable" recovery to a crisis that has disproportionately affected women, signalling that she might push for advances to gender equality.

But there are reasons to be skeptical.

Freeland will be working closely with Trudeau, whose own feminist credentials are increasingly under scrutiny. During his first campaign as Liberal leader, Trudeau touted his feminism proudly - remember "Because it's 2015"? - only to bury the topic during his bid for re-election last year.

That may have been due to the departures of star cabinet ministers Jody Wilson-Raybould and Jane Philpott, which sparked a conversation about Trudeau's feminism.

Several times, it has been noted that the prime minister's use of progressive language does not reflect his government's actions.

We recently published a study based on an analysis of three years of official speeches by the prime minister and found that Trudeau rarely spoke from a feminist standpoint: gender equality and mentions of women's rights were largely contained and limited by the discourse of economic prosperity.

Overall, we found that Trudeau's understanding of feminism appears to align with "neoliberal feminism," a form of feminism that focuses primarily on women's economic empowerment as a means to achieve gender equality.

Neoliberalism is mostly marked by trade liberalization, deregulation and privatization of government services. It emphasizes economic prosperity as the ultimate measure of success, treating individuals as taxpayers or service users, rather than citizens.

Our paper highlights at least three ways in which neoliberal feminism is problematic. These may be relevant in questioning Freeland's own feminist stance.

This view allows society to ignore the need to address deep structural barriers to substantive equality such as discrimination on the basis of race, ability, nationality and so on.

Second, the idea that women are best emancipated through economic empowerment tends to speak only to a certain group of them: The famous book Lean In, by Facebook's Sheryl Sandberg, might have been well-received by privileged women and those climbing corporate ladders across the globe, but women in lower socio-economic ranks simply don't have access to this type of individualist pursuit of success.

What's more, no amount of leaning in would help most women of colour, transgendered persons, undocumented migrants or so many others overcome the very real barriers that they face in the workplace.

Finally, the type of casual approach that accompanies neoliberal feminism tends to gender-neutralize issues that are very much about gender, such as child care.

Overall, gender-neutralization works in much the same way as colour-blindness has worked when addressing questions of race and justice (in other words, not well).

Read more: When it comes to race and justice, 'colour-blindness' is not good enough

Neoliberalism has turned childcare into a question of children's rights and success while ignoring its importance for women.

Another example of gender-neutralization is violence against Indigenous women and girls. To Trudeau's credit, our study did find that he tends to address this issue head on.

Studies have found that if women-specific issues are not tackled as such, then women become invisible in policy-making.

There is no question that the Trudeau government has made efforts to bring a feminist lens to various files. The prime minister's commitment to appointing women to important positions has had a positive effect; major policies have taken feminism into account, particularly in foreign affairs.

But Canada's Feminist International Assistance Policy, which both Trudeau and Freeland support, uses feminism as a conduit for economic ends rather than considering gender equality an end on its own.

This type of framework is gaining strength. Championed by global organizations like the World Bank, it proposes that women's empowerment makes "good business sense" for countries. The problem is that, in this view, women end up as little more than a resource in the toolbox for economic prosperity. Our study confirms this point.

How, and how often, Freeland will apply her view of feminism in her new role remains to be seen. As the finance minister of a G7 nation, Freeland has entered a club of political leaders whose entire world view has been shaped by neoliberalism.

But if she wants a truly equitable recovery, Freeland will have to find a way out of this neoliberal straitjacket.

TEHRAN (Tasnim) - Joe Biden did a better job in the final debate on Thursday, according to a CNN Instant ...

Ireland locks down as second wave of virus sweeps through Europe

Bahrain collaborating with Israel for more than decade, says report

MANAMA, Bahrain - Israel has been operating a secret embassy in Bahrain for more than 11 years, according to a ...

Last week, the Iranian-flagged oil tanker Samah entered the Mediterranean Sea via the Suez Canal. After a few miles, the ...

New Chinese train will run at 400 kilometres an hour

Photo taken on Oct. 21, 2020 shows the new type of high-speed train which can run on different rail systems ...

This week the United States Department of Justice (DoJ) filed a lawsuit accusing Google of using "anticompetitive tactics to maintain ...

Although global trade is making a frail recovery, the outlook remains uncertain, UN trade and development body UNCTAD said on ...

California recently announced that it plans to ban the sales of gas-powered vehicles by 2035, Ontario has invested $500 million ...

A time for borrowers to restructure loans and other debt obligations

JAKARTA, Indonesia - The economic impact of coronavirus crisis has been perceived. We have seen hundreds or even thousands of ...