Drill hole locations with the significant gold intercepts can be seen in Figure 1 and in a longitudinal cross section in Figure 2. Refer to the July 27, 2019 Aston Bay news release for additional information on previous drilling.

'These intercepts confirm the extension of the gold-bearing Buckingham Vein to the southeast and once again demonstrate high grade gold mineralization in this mesothermal-type vein,' stated Thomas Ullrich, CEO of Aston Bay. 'We look forward to the pending results from holes 20 and 21, located 50 m farther along strike, both of which intersected quartz vein with visible gold, as well as assays from the three holes targeting zones of disseminated sericite-pyrite-quartz-gold mineralization below significant gold-in-soil anomalies to the west of the vein.'

'The Buckingham Vein is a mesothermal type vein, with visible gold and sulfides in quartz and associated with sericite and carbonate alteration. The veins appear to be closely related to zones of faulting and shearing within the altered metavolcanic host. They typically lack the banding textures of epithermal veins and have only very low levels of the classic epithermal pathfinder elements. Mesothermal veins are known to host deposits with significant extent and impressive gold grades elsewhere in the world such as the greenstone/Archean deposits in Quebec and Ontario and lode veins of the western US, so the identification of these mesothermal gold-bearing systems at Buckingham is very encouraging. Their presence in this area may have been overlooked due to the deep weathering profile and scarcity of rock outcropping at the surface. We are excited to discover these types of veins at Buckingham and plan to broaden our exploration program for additional occurrences in Virginia.'

About the Buckingham Main Zone

Discovered by prospecting in 2015 following up on a gold anomaly from a 1996/97 stream sediment survey, the NW-SE trending Buckingham Main Zone comprises a series of visible gold-bearing quartz vein outcrops that extend over a strike length of some 150 m at surface and have yielded grab sample assay values up to 701 grams per tonne (g/t) Au. Three core holes drilled on the vein in 2016 yielded significant core-length intercepts of 17.1 g/t Au over 1.98m (WAR16-06) and 24.3 g/t Au over 2.59m (WAR16-05).

In this recently completed Phase 2 drilling, four of the drill holes (BUCK-018 through BUCK-021, see Figure 1) targeted the along-strike projection of the Buckingham Vein; all four holes intersected visible gold-bearing quartz vein material indicating an along-strike extension of 150 m from the 2019 drilling for a total known strike length of over 200 m for the vein. Results from two of the drill holes are presented here (33.50 g/t Au over 1.29 m in BUCK-018 and 1.40 g/t Au over 2.75 m including 2.90 g/t Au over 1.25 m in BUCK-019); results from the two remaining drill holes with visible gold-bearing quartz vein intercepts (BUCK-020 and -021) are pending. Three drill holes (BUCK-017, -022 and -023; results also pending) targeted gold-in-soil anomalies to the west and southwest of the vein and intersected broad zones of sericite-quartz-pyrite mineralization similar in character to gold-bearing mineralization intersected in previous drilling.

A table with significant intersections from all drill holes at the Buckingham Vein and surrounding zones of disseminated mineralization in the larger Buckingham Main Zone is presented in Table 2.

The gold-bearing system at the Buckingham Project is hosted within a package of likely late Precambrian or early Cambrian-age sediments, including greywackes with minor quartz-arenites (phyllite, schist and quartzites), within the Appalachian orogenic belt, hosting past producing mines, current gold mines and advanced gold exploration plays in a belt from Georgia, the Carolinas, Virginia, Nova Scotia and through to Newfoundland. This region is the site of the historically prolific Virginia Gold-Pyrite Belt which hosted a reported 250 gold mines that were in production prior to the California gold rush of 1849 but has seen little recent mineral exploration. Gold production has also occurred to the south in the Carolina Slate Belt, notably at OceanaGold's Haile Mine located in South Carolina with commercial production commencing in 2017 and slated to produce up to 150,000 ounces of gold per year.

In addition to the 4,953 acres surrounding the Buckingham vein, Aston Bay has exploration agreements in place for 4,399 acres of private land surrounding several historical gold mine workings and other prospective areas in Virginia. A prospecting program, including surface rock and soil sampling, has been completed on parcels of land located over and adjacent to a historic past-producing mine located 20 km southeast of Buckingham, with results expected in the coming weeks. Continued exploration in these and other brownfields areas is planned throughout the summer and fall.

Samples from the Company's 2020 Buckingham drill program were shipped to the ALS Laboratory in Vancouver, BC for analysis. A secure chain of custody was maintained, and the program included a comprehensive QAQC program, which did not identify any preparation or analytical issues. Results from the remaining five drill holes (BUCK-017, -020, -021, -022 and -023) are pending. Analysis will be by standard fire assay techniques which will include metallic screen assaying of selected intervals with visible alteration and mineralization (including visible gold). Results are anticipated in the coming weeks. 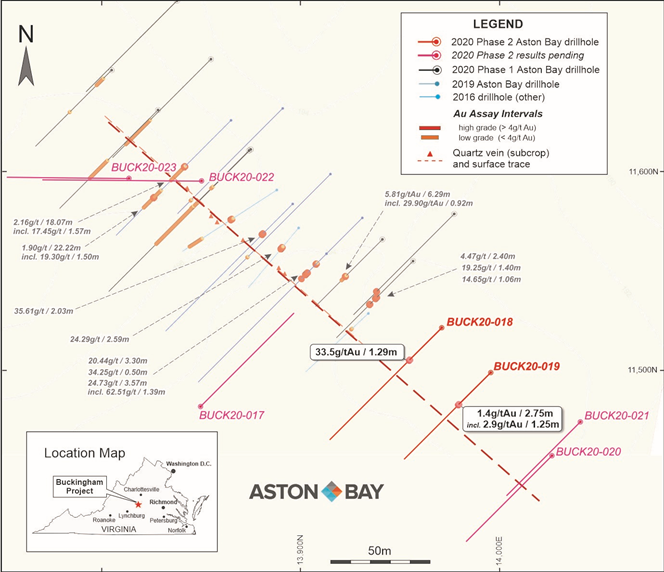 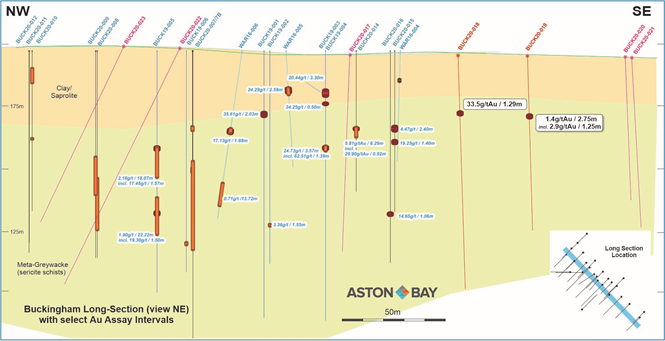 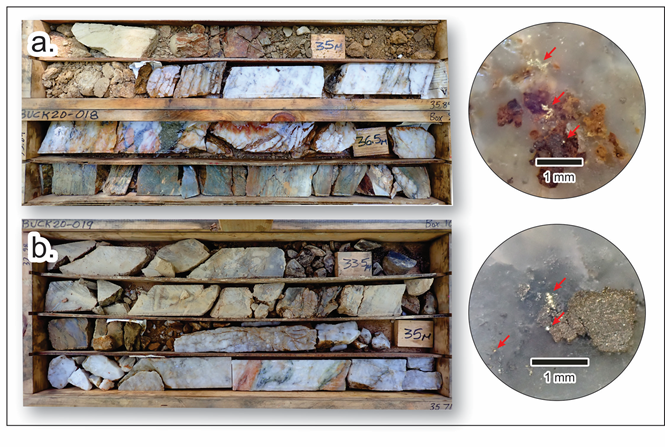 Figure 3: Photograph of quartz vein intervals intersected in HQ-sized diamond drill hole a) BUCK-018 and b) BUCK-19 with examples of visible gold depicted at right, indicated by red arrows. Scale as noted.

As per National Instrument 43-101 Standards of Disclosure for Mineral Projects, Andrew Turner, P.Geol., a consultant to Aston Bay, is the Qualified Person for the Company and has prepared, validated and approved the technical and scientific content of this news release. The Company strictly adheres to CIM Best Practices Guidelines in conducting, documenting, and reporting its exploration activities.

Aston Bay is a publicly traded mineral exploration company exploring for gold and base metal deposits in Virginia, USA, and Nunavut, Canada. The Company is led by CEO Thomas Ullrich with exploration in Virginia directed by the Company's advisor, Don Taylor, the 2018 Thayer Lindsley Award winner for his discovery of the Taylor Pb-Zn-Ag Deposit in Arizona.

The Company has acquired the exclusive rights to an integrated dataset over certain prospective private lands and has signed agreements with timber and land companies which grants the company the option to lease the mineral rights to 11,065 acres of land located in central Virginia. These lands are located within a gold-copper-lead-zinc mineralized belt prospective for Carolina slate belt gold deposits and Virginia gold-pyrite belt deposits, as well as sedimentary VMS, exhalative (SEDEX) and Broken Hill (BHT) type base metal deposits. Don Taylor, who led the predecessor company to Blue Ridge and assembled the dataset, has joined the Company's Advisory Board and will be directing the Company's exploration activities for the Blue Ridge Project. The Company is actively exploring the Buckingham Gold Project in Virginia and is in advanced stages of negotiation on other lands in the area.

The Company is also 100% owner of the Aston Bay Property located on western Somerset Island, Nunavut, which neighbours Teck's profitable, past-producing Polaris (Pb-Zn) Mine just 200km to the north. The Aston Bay Property hosts the Storm Copper Project and the Seal Zinc Deposit with drill-confirmed presence of sediment-hosted copper and zinc mineralization.

The Company's public disclosure documents are available on www.sedar.com. 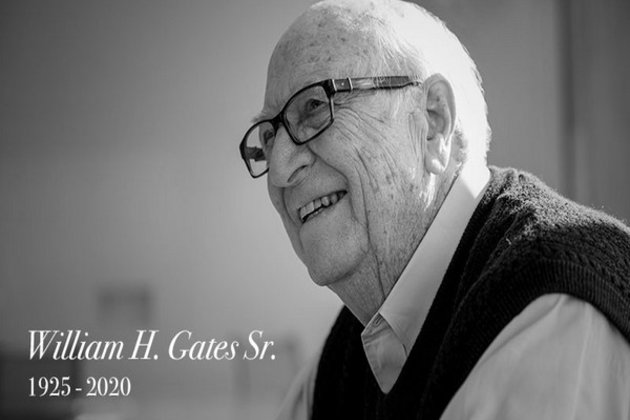