VANCOUVER, BC / ACCESSWIRE / May 28, 2020 / GREAT ATLANTIC RESOURCES CORP. (TSXV:GR)(FRA:PH01) (the 'Company' or 'Great Atlantic') is pleased to announce it has begun the 2020 exploration program at its Golden Promise Gold Property, located in the central Newfoundland gold belt. Exploration will be conducted this year in numerous regions of the property focusing on areas of gold bearing quartz veins and quartz vein float and areas of gold soil geochemical anomalies. Exploration is currently underway in the southwest region of the property in an area of gold soil geochemical anomalies to define trenching and diamond drilling targets. 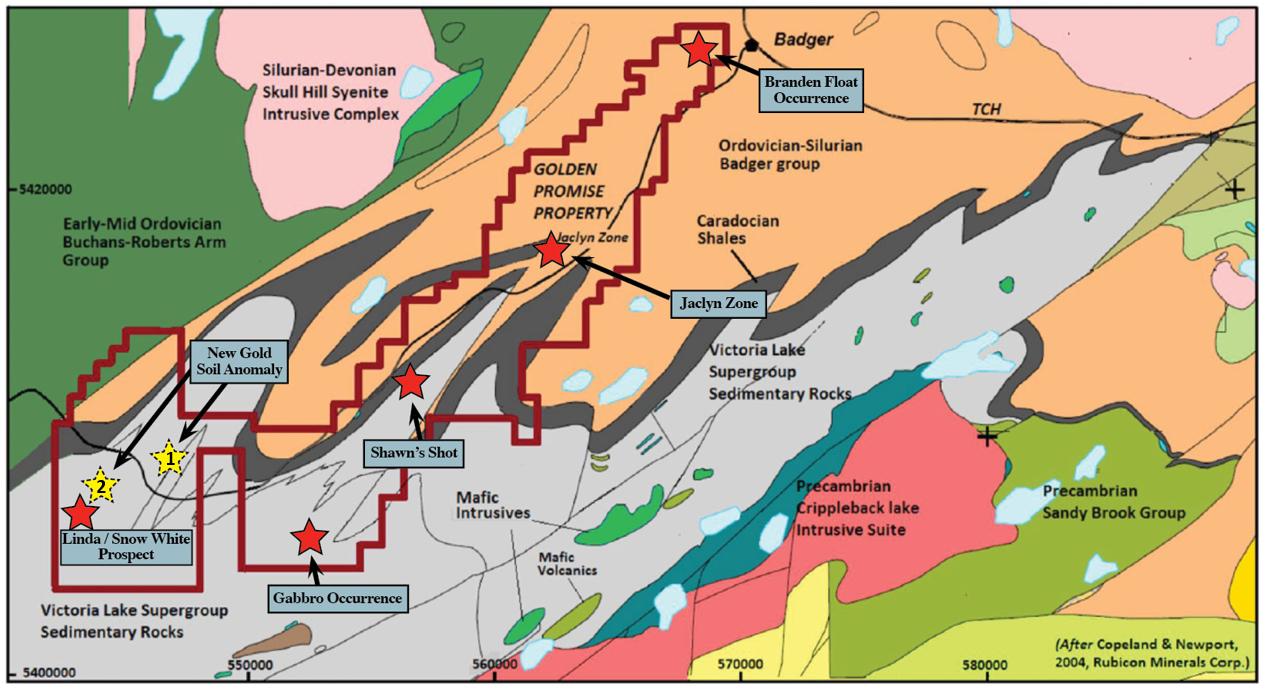 Ground geophysics is also planned during 2020 at the Gold Anomaly 1 target area. 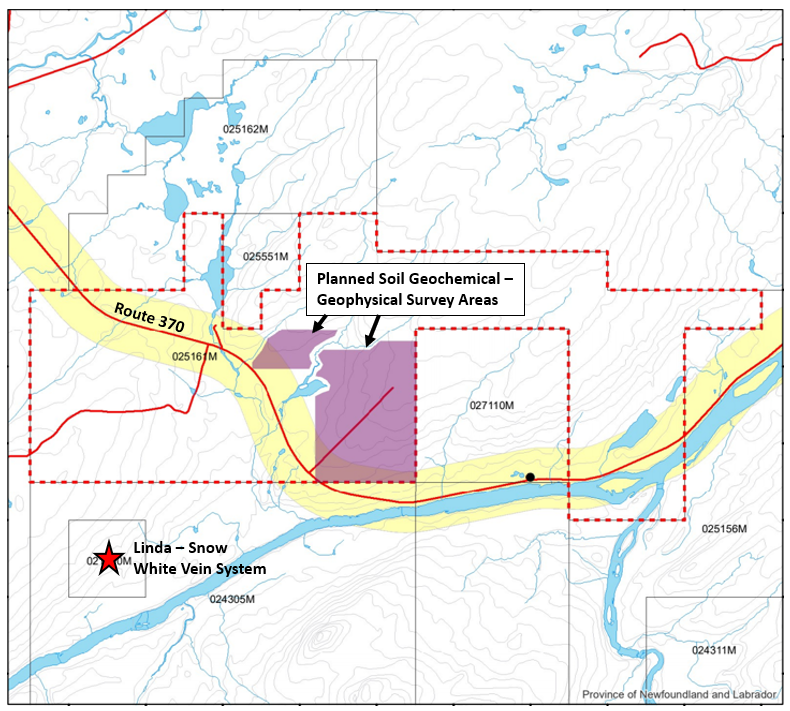 Planned Phase 2 drill holes include in-fill holes at the JMZ and a series of drill holes east of and along the projected strike of the JNZ, including areas of high-grade quartz boulders. This will include additional drill holes in the west area of the JMZ within the conceptual open pit area, an area of high grade 2019 drill intersections Drill core samples from seven of ten holes completed during 2019 at the JMZ exceeded 10 g/t gold (Company News Releases of February 6, 12 and 19, 2020). The JNZ is located approximately 250 meters north of the JMZ. During 2017 Great Atlantic excavated high-grade quartz boulders in trenches east of and along the projected strike of the JNZ. Assays of quartz boulder samples excavated during 2017 east of the JNZ included 163.9, 208.5 and 332.6 grams per tonne (g/t) gold (Great Atlantic News Release of August 31, 2017). 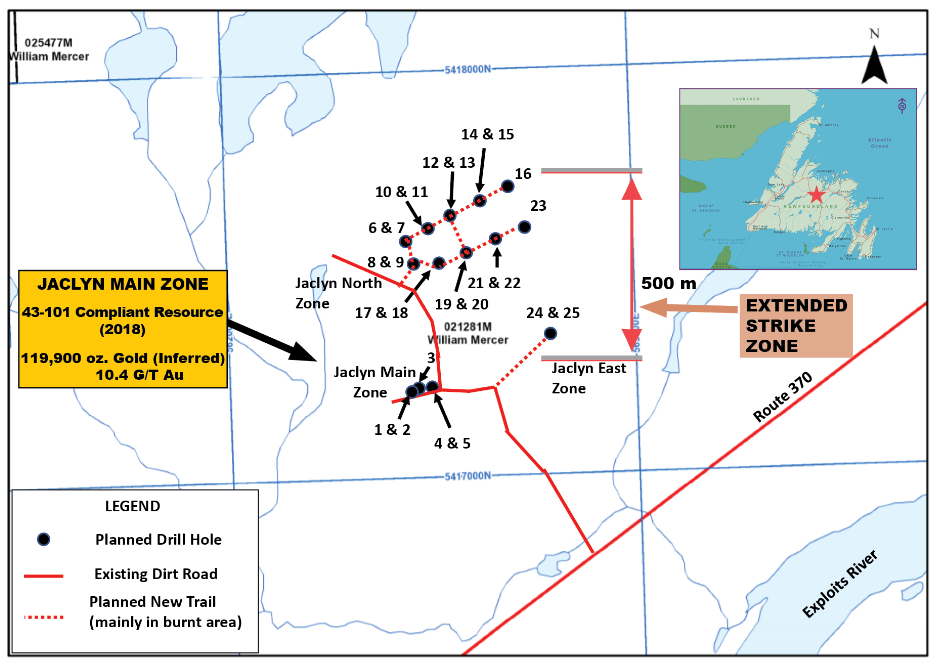 The drill core samples from the 2019 program were analyzed at Eastern Analytical Ltd. Samples of main quartz veins and quartz veined zones were analyzed by the Total Pulp Metallics - Fire Assay method. This involves crushing of the entire sample to -10 mesh and pulverizing to 95% -150 mesh. The total sample is then weighed and screened 150 mesh. The +150 mesh fraction is fire assayed for gold, and a 30 gram sub-sample of the -150 mesh fraction is fire assayed for gold. A calculated weighted average of total gold in the sample is reported as well (gold values reported by the Company in News Releases are weighted average values). Other samples were assayed for gold by fire assay (30-gram sub-samples) and analyzed for 34 elements (200-mg sub-samples totally dissolved in four acids and analyzed by ICP-OES). Eastern Analytical Ltd., a certified laboratory, is independent of Great Atlantic. Blank and standard samples were included with the drill core sample submissions. Duplicate analysis was conducted for some samples. The 2017 trenching program rock samples were also submitted to Eastern Analytical Ltd. for preparation and analysis. The high-grade quartz vein boulder samples were analyzed for gold by Total Pulp Metallics - Fire Assay. The sample submission included gold standard and blank samples.

Mineral Resources are not Mineral Reserves and do not have demonstrated economic viability.

There is no certainty that all or any part of the Mineral Resources estimated will be converted into Mineral Reserves.

Mineral resource tonnage and contained metal have been rounded to reflect the accuracy of the estimate, and numbers may not add due to rounding.

Mineral resource tonnage and grades are reported as undiluted.

As reported in the National Instrument 43-101 Technical Report on the Golden Promise Property, Central Newfoundland (revised), dated December 4, 2018 by Mr. Greg Z. Mosher, M.Sc. App., P.Geo., and Mr. Larry Pilgrim, B.Sc., P.Geo., the JMZ was modelled as a single quartz vein that strikes east-west and dips steeply to the south. Modelled vein thickness was based on true thickness derived from quartz vein intercepts. The estimate is based on 220 assays that were composited to 135 one-meter long composites. A bulk density of 2.7 g/cm3 was used. Blocks in the model measured 15 meters east-west, 1-meter north-south and 10 meters vertically. The block model was not rotated. Grades were interpolated using inverse-distance squared (ID2) weighting and a search ellipse that measured 100 meters along strike, two meters across strike and 50 meters vertically. Grades were interpolated based on a minimum of two and a maximum of 10 composites with a maximum of one composite per hole so the grade of each block is based on at least two drill holes thereby demonstrating continuity of mineralization. For the capped mineral resource estimate, all assays that exceed 65 g/t gold were capped at 65 g/t gold. All resources were classified as Inferred because of the relatively wide spacing of drill holes through most of the zone.

Because part of the vein is near surface the resource estimate was constrained by a conceptual open pit to demonstrate reasonable prospects of eventual economic extraction. Generic mining costs of US$2.50/tonne and processing costs of US$25.00/tonne were used together with a gold price of US$1,300/ounce. A conceptual pit slope of 45° was assumed with no allowance for mining loss or dilution. Based on the combined hypothetical mining and processing costs and the assumed price of gold, a pit-constrained cutoff grade of 0.6 g/t was adopted. For the underground portion of the resource a cutoff of 1.5 g/t was assumed. The cutoff grade for the total resource is the weighted average of the pit-constrained and underground cutoff grades. 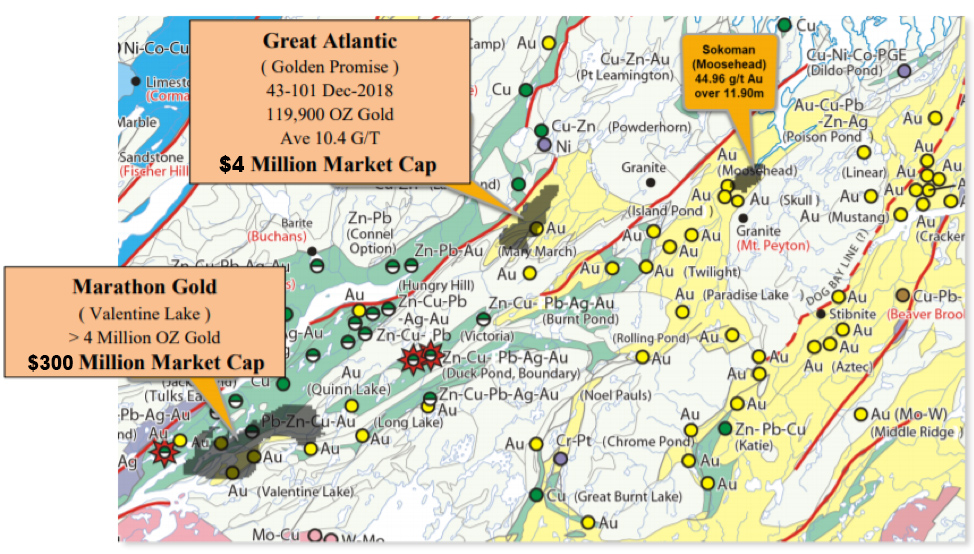 The Golden Promise Property hosts multiple gold bearing quartz veins and is located within a region of recent significant gold discoveries. The property is located within the Exploits Subzone of the Newfoundland Dunnage Zone. Within the Exploits Subzone, the property lies along the north-northwestern fringe of the Victoria Lake Supergroup (VLSG), a volcano-sedimentary terrane. The northwestern margin of the Golden Promise Property occurs proximal to, and, in part, contiguous with a major (Appalachian-scale) collisional boundary, and suture zone, known as the Red Indian Line (RIL). The RIL forms the western boundary of the Exploits Subzone. Recent significant gold discoveries in this region of the Exploits Subzone include those of Sokoman Minerals Corp. (SIC) at the Moosehead Gold Project and Marathon Gold Corp. (MOZ) at the Valentine Gold Project. Readers are warned that mineralization at the Moosehead Property and Valentine Gold Project is not necessarily indicative of mineralization on the Golden Promise Property.

Readers are warned that historic data referred to in this News Release for the Lina - Snow White quartz vein system have not been verified by a qualified person.

David Martin, P.Geo., a Qualified Person as defined by NI 43-101 and VP Exploration for Great Atlantic, is responsible for the technical information contained in this News Release.

On Behalf of the Board of Directors

About Great Atlantic Resources Corp.: Great Atlantic Resources Corp. is a Canadian exploration company focused on the discovery and development of mineral assets in the resource-rich and sovereign risk-free realm of Atlantic Canada, one of the number one mining regions of the world. Great Atlantic is currently surging forward building the company utilizing a Project Generation model, with a special focus on the most critical elements on the planet that are prominent in Atlantic Canada, Antimony, Tungsten and Gold. 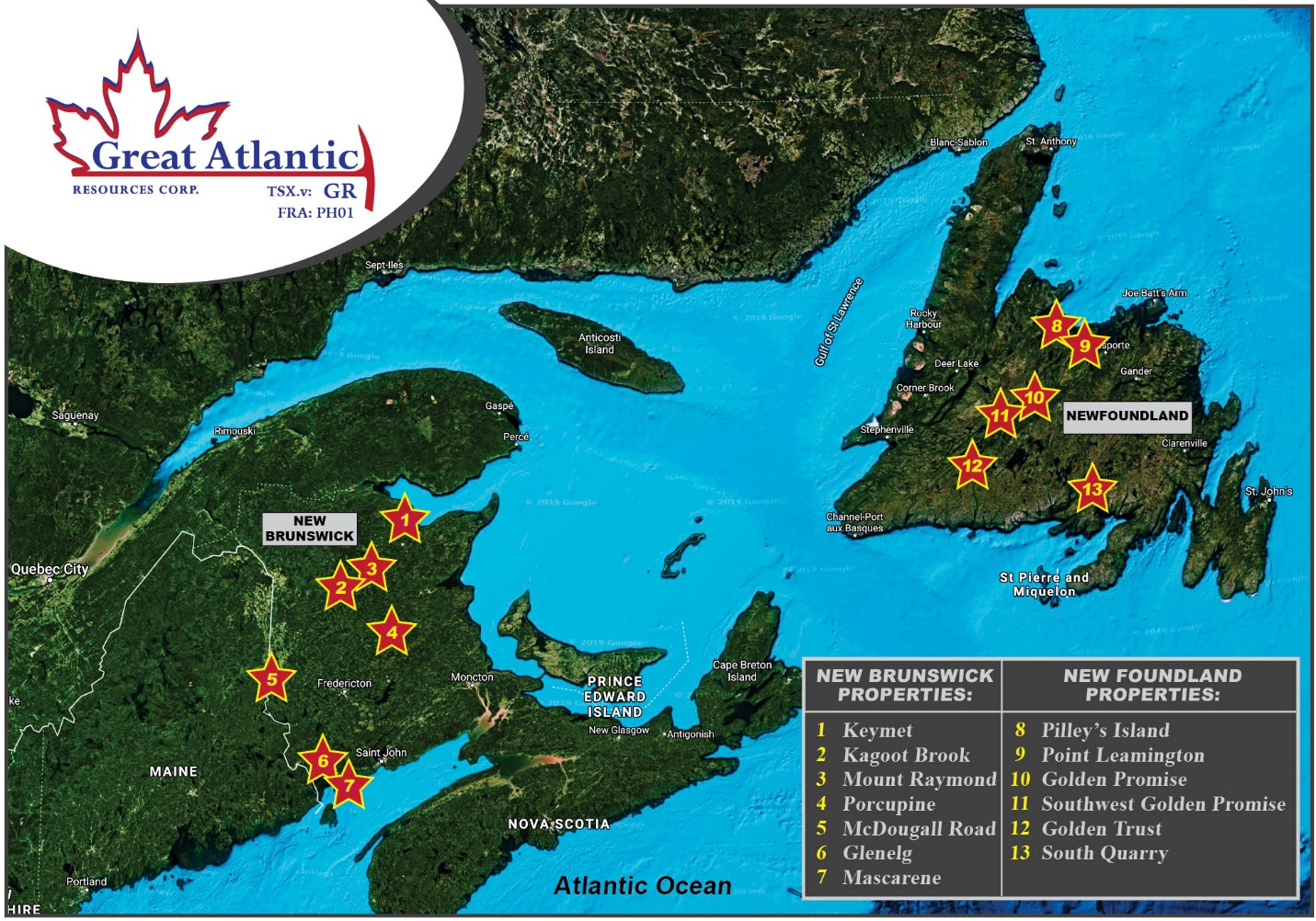 Humanitarian aid to continue after UNSC pact on access points

NEW YORK, New York - Sanity prevailed on Saturday as last minute efforts to stitch up a renewal of the ...

MIAMI, Florida - U.S. President Donald Trump went to Florida on Friday for a briefing on what he said has ...

GENEVA, Switzerland - Lebanon, faced with an economy in upheaval, mass protests, and the crippling effects of the coronavirus is ...

The British Armed Forces led their nation in saying farewell to the Forces' Sweetheart with a series of ceremonial tributes ...

SEOUL, South Korea - North Korea says the chances are low for another summit with the United States, after President ... 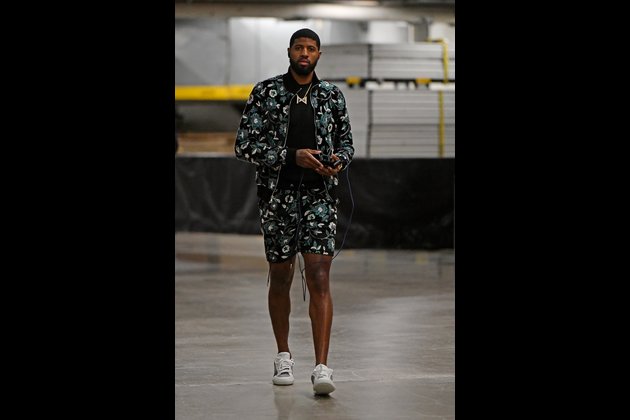 Add players' famed fashion statements when entering the arena to the list of things excluded from the NBA bubble near ...

UK to spend hundreds of millions of pounds on border infrastructure

NEW YORK, New York - U.S. stocks roared on Friday, shrugging off concern about the burgeoning coronavirus in the United ...

Tech stocks were going strong even before Covid-19, but behavioral shifts during the pandemic have lifted the sector further into ...