NEW YORK - New York's governor said Thursday that his state has enough ventilators to last about a week, as the number of confirmed coronavirus cases there nears 100,000.

He cautioned that if cases of COVID-19, the disease caused by the coronavirus, surge within that time frame, or if the anticipated number of cases at the peak exceeds projections or lasts longer, the state could face a shortage of breathing machines.

The governor has been working with his team to purchase 30,000 ventilators for his state of 19.5 million people. Half of them would be sent to New York City, which has about 60% of the state's virus cases. With worldwide demand surging, however, it has been difficult to get the number needed quickly enough.

New York has been creative in trying to stretch its current supply of ventilators - allowing them to be refitted to assist two patients simultaneously - as well as converting anesthesia and BiPap machines, which also can push air into patients' lungs. The state has also canceled all non-emergency surgeries to free up existing ventilators.

He said about 350 people per night requiring ventilators are admitted to hospitals in the state. New York has approximately 2,200 ventilators left in its stockpile to be deployed as needed.

"Three hundred-fifty people come in every night who need a ventilator, so 2,200 you see, disappears very quickly," Cuomo said.

To date, New York has received 4,400 ventilators from the federal government.

COVID-19 deaths hit 432 people n a 24-hour period in the state. In all, at least 2,400 New Yorkers have lost their lives to the respiratory virus.

On a promising note, Cuomo said that while hospitalizations are rising, so are the numbers of people recovering and being released.

WASHINGTON, DC - Washington is locked down and U.S. law enforcement officials are geared up for pro-Trump marches in all ...

WASHINGTON, DC - In a sign of the changing political environment in the Middle East, the United States military will ...

A Chinese government survey ship was intercepted "running dark" without broadcasting its position via AIS (Automated Identification System) by Indonesian ...

WASHINGTON, DC The man who struck down three U.S. Capitol Police officers with a fire extinguisher during last week's storming ...

WHO Chief Warns About Inequity of Global COVID Vaccine Campaign 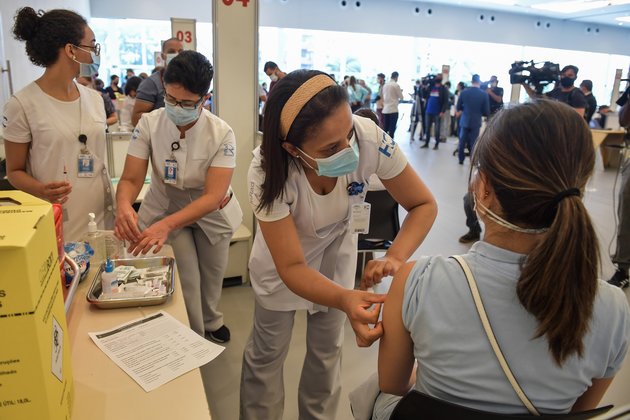 The head of the World Health Organization is calling for greater global equity in COVID-19 vaccinations, saying rich countries need ...

SYDNEY, NSW, Australia - Stocks in mainland China and Hong Kong advanced on Monday on news that the world's second-largest ...

Owner of pharmacy conglomerate gets 18 years for defrauding TRICARE

A U.S. businessman, a giant in the pharmaceutical industry, is to be jailed for eighteen years and will have to ...

DUBLIN, Ireland - A major increase in the export of medical and pharmaceutical products has boosted Ireland's balance of trade. ...

Orders for Nissan Magnite vehicles in India stands at 35,000

BANGALORE, India - Following an earlier report of 36 units of the Nissan Magnite being delivered on a single day ...

NEW YORK, New York - Wall Street ended the week on a negative note Friday with all the major indices ...