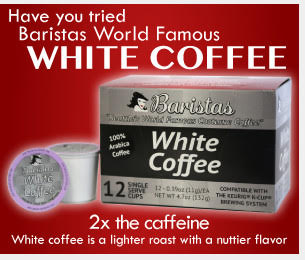 This marketing push is a result of Baristas recently completing its largest production run with its co-packing supply partner along with smaller yet quicker production runs that have been completed utilizing Baristas in-house production line.

The advertising launch, which began today with digital exposure, is also planned to include television, radio, print, and new media. Initially, ads and promotions will direct consumers to www.trywhitecoffee.com or to purchase directly from Amazon at https://www.amazon.com/Baristas-Coffee-Single-Keurig-Compatible/dp/B01AO9JAHA/ref=sr_1_2?keywords=baristas+white+coffee&qid=1582641786&sr=8-2 and will leverage data from past media efforts to maximize the return from the exposure.

Barry Henthorn CEO stated: 'We are confident that with our expanded allocation of production capabilities with our co-packer combined with our in-house production capabilities that we will be able to meet the inventory demands that are being driven by our latest marketing push. In the past, Baristas has been very successful in converting marketing into sales and has refined its messaging to create a low customer acquisition cost. Too often, this has translated into greater than expected orders with which we have struggled to maintain inventory. With both our largest production run to date now completed with our co-packing partner and our in house production capabilities, we believe that we will be able to quickly meet the demands created by our marketing push that began this morning.'

Those who have followed the progress at Baristas are aware of the commitment Baristas has made in the past, creating a steady supply of news and information highlighting Baristas products, the progress the Company is making on increasing revenues, and expanding its' market share. The Company has also engaged in a renewed focus on informing investors of our weekly progress through media news coverage, financial insight messaging, expanded PR opportunities, creating awareness, and diversifying the Baristas investor and customer base.

The media buys, and other cutting edge marketing are made possible and were created via digital media frontrunner ReelTime Media (OTCPINK:RLTR) www.reeltime.com, whose capabilities are redefining how companies are evaluating and purchasing their TV, radio, print, and other new media. Baristas is now ready to support its new products and distributors with a marketing effort educating and driving consumers to consume Baristas' historical and new products.

About Baristas Coffee Company: Baristas is a national Coffee Company that is recognized throughout the US. It currently produces and sells coffee related products under the Baristas brand. The Baristas White Coffee single-serve cups compatible with the Keurig 2.0 brewing system is the bestselling product in its category. Baristas also market other coffee-related products. Baristas gained mainstream exposure when it became the subject of 'Grounded in Seattle' the reality show special feature which aired on WE tv. It has been featured nationally including during Shark Tank on CNBC with Front Montgomery, CNN, ESPN, Food Network, Cosmopolitan Magazine, Forbes Magazine, Modern Living with Kathy Ireland, Sports Illustrated, NFL Monday and Thursday Night Football with Megs McLean, at NASCAR Races, at the 2019 Super Bowl, The Grammys, NBA TV, and other notable media.

TEL AVIV, Israel - The Jewish state is coming under pressure over the growing humanitarian crisis in Gaza, which is ...

Trump companies to be included in Covid-19 bailout package

WASHINGTON, DC - As part of the $2.2 trillion stimulus bill signed into law after it passed the House of ...

In an extraordinary statement titled "On the Political Impasse in Afghanistan," Washington has admitted to the failure of Secretary of ...

Dozens of sailors on board USS Teddy Roosevelt have Covid-19

BEIJING, China - Despite the lockdown in Wuhan scheduled to end on 8 April, China on Friday imposed a ban ...

LONDON, UK - British Prime Minister Boris Johnson has contracted the novel coronavirus, according to a tweet he posted on ...

KANPUR, Uttar Pradesh, India - Several truck drivers, many with goods loaded on their vehicles, have been stuck in Uttar ...

NEW YORK, New York - U.S. stocks were sold off sharply on Friday, despite the House of Represnetatives passing a ...

The coronavirus crisis has turned the fact that we don't make anything in America anymore from a topic for philosophical ...

SYDNEY, Australia - Shares were decidedly mixed across Asia on Friday. In Japan they soared in value. In Australia they ...

BRUSSELS, Belgium - The European Parliament on Thursday evening passed a $40 billion emergency package to help countries and their ...