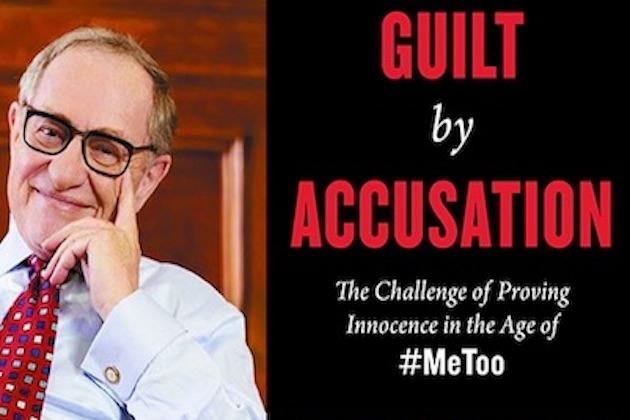 On December 30, 2015, in a court in Florida, Alan Dershowitz, was accused of having had sex on seven occasions with Virginia Roberts Giuffre, an underage girl, at exotic locations, including the Caribbean island compound and New Mexico ranch owned by financier and convicted sex offender Jeffrey Epstein.

He makes a detailed, emotional and often compelling case that he is innocent of the sexual misconduct charges against him.

He also uses his experiences to argue that the #MeToo movement in the United States, which "has generally been a force for good," is being hijacked by "some bad people," who are lining their pockets by allowing false accusers to hide behind #MeToo's "virtuous shield."

Dershowitz asks his readers to "imagine what it feels like to be accused of a terrible crime with which you had absolutely nothing to do." And, despite the absence of evidence other than the accusation itself, to have the burden of proof thrust upon you in the court of public opinion to "prove a negative and prove it conclusively."

To refute Giuffre's claims, Dershowitz draws on a substantial amount of documentary evidence.

Her employment records, he indicates, prove that she did not meet Epstein until she was 17, giving the lie to her assertion that she had a "Sweet 16 celebration" with the sex trafficker.

Dershowitz cites Secret Service files to demonstrate that Giuffre made up her vivid account of a dinner with former US president Bill Clinton on Epstein's Little Saint James island.

He provides travel documents (and credit card receipts) that support his claim that he could not have been present on the dates Giuffre specified for their assignations.

He includes the transcript of a telephone conversation with David Boies, whose firm represented Giuffre, in which Boies promised to tell his client that she either "misidentified somebody or perhaps had somebody intentionally misidentify him for you." Boies, he implies, subsequently reneged.

Dershowitz also reads into the record the statement attested to by Brad Edward and Paul Cassell, Giuffre's attorneys when the litigation was settled in 2016, which included her acknowledgment "that the underlying alleged misconduct may have occurred with someone else."

To undercut the credibility of Sarah Ransome, Dershowitz reveals she told a reporter for the New York Post that she possessed "sex tapes" of Hillary and Bill Clinton, Donald Trump, and Richard Branson, had been targeted for assassination by the CIA, and had worked for the KGB. Ransome subsequently admitted she had "invented" the story to exact revenge on Epstein.

Dershowitz's explanation of why he was named by these two women is considerably more speculative. David Boies (who represented Al Gore in the contested presidential election in 2000) is the archvillain of Guilt by Association. Relying on a statement by Rachel Boylan, Giuffre's best friend, Dershowitz asserts again and again that Giuffre did not mention having sex with him "until she met her lawyers, who must have told her she would get a big payday if she accused me." He accepts Boylan's explanation that he was the fall guy in a plot to shake down Leslie Wexner, the owner of Limited Too and Victoria Secret: Dershowitz provided the billionaire, who was accused of sleeping with underage women while they were dressed in baby-doll lingerie, an example of the devastating impact of being "outed." He accepts the claim of an unidentified source that Boies "trolled" for a second accuser because "two are better than one." Boies, Dershowitz adds, "has told people that even if he can't defeat me in court, he can 'bankrupt' me with legal fees."

To bolster his contention that Boies "will stop at nothing to even perceived scores, even if it hurts his law firm, as his vendetta against me has done," Dershowitz inserts Appendix A, an account of "David Boies' Long History of Conflicts of Interest." Boies, we can assume, will have something to say about Dershowitz's characterization of him.

The #MeToo movement, Dershowitz writes, has "commendably forced into public view the rampant exploitation of vulnerable women by predatory men." He agrees that victims of sexual abuse should be encouraged to come forward.

Dershowitz maintains, however, that the media, in general, have failed to engage in nuanced reporting that includes a commitment to investigate plausible claims by individuals who assert they have been falsely accused.

He cites stories about him that appear to place an ideological thumb on the scale. A reporter for the Miami Herald, he indicates, omitted from her narrative every piece of evidence that raised doubts about Giuffre's credibility. A writer for The New Yorker used a discredited website to report that Dershowitz's first wife jumped off the Brooklyn Bridge to her death. A correspondent for the Daily Beast begged Dershowitz to share exculpatory material with him "to set the record straight," and then failed to follow up, because his editor did not want to undercut "the mantra that women must be believed."

That said, Dershowitz may generalize too much from his own experience. Most accusers have a lot more to lose than gain by coming forward. The evidence suggests, moreover, that far more often than not, in high-profile as well as no-profile cases, they are telling the truth. And many face indifference or hostility in the criminal justice system.

Consider, for example, the trials and tribulations of women assaulted by Bill Cosby. Consider the six-month sentence given to Brock Turner, the Stanford University athlete, who was convicted in 2016 of three counts of felony sexual assault.

Sensationalist allegations have been a mainstay of radio, television and print media for quite some time. Social media, of course, have upped the ante. It is also worth mentioning that after Dershowitz provided ABC TV executives with evidence about his case, they decided not to schedule an interview with Giuffre on the evening news, Good Morning America, or Nightline. And that critiques of the "rush-to-judgment excesses" of the #MeToo movement have appeared with increasing regularity across all media.In a nation "rightly committed both to the role of courts in resolving disputes and to the protection of free expression," Dershowitz affirms, "there are no perfect solutions" to the "Kafkaesque situation" in which he found himself. He believes, however, that a few changes in the law might help.

Lawyers, Dershowitz suggests, should be subject to discipline for filing false allegations without doing due diligence. Courts should level the playing field by revising the so-called deposition privilege and granting reciprocal immunity from defamation to the accused as well as the accuser in statements made in public court filings and depositions. And the media should require all parties to repeat accusations made in court submissions on the record, before disseminating them.

Not at all confined to the #MeToo movement, guilt by accusation has, alas, become a staple of 21st-century politics and culture. Eradicating it should, as Dershowitz concludes, be "everyone's battle."

(The writer Glenn C. Altschuler is the Thomas and Dorothy Litwin Professor of American Studies at Cornell University).

Heads of state and government from dozens of countries arrived in Jerusalem to mark the 75th anniversary of the liberation ...

GENEVA, Switzerland (ANI/Sputnik) - The WHO Emergency Committee held a discussion on Wednesday over concerns about the coronavirus outbreak in ...

Senate approves impeachment rules after being rebuked by chief justice

OUAGADOUGOU, Burkino Faso - (ANI/Sputnik): Thirty-six civilians were killed on Monday in an attack on a market in Sanmatenga province, ...

SYDNEY, Australia - Stocks in Asia fell sharply on Thursday as the death toll from the Wuhan coronavirus rose to ...

SYDNEY, Australia - Stocks in Asia rebounded on Wednesday, clawing back some of the extensive losses of a day earlier.The ...

NEW DELHI, India: At least five flights were diverted from the Delhi Airport due to bad weather on Wednesday morning."Five ...

Deathdream (aka Dead of Night)