VANCOUVER, BC / ACCESSWIRE / November 5, 2019 / Surge Exploration Inc. (the 'Company' or 'Surge') (TSXV:SUR)(OTC:SURJF)(FRA:DJ5C) is pleased to report it has negotiated the acquisition of a 100% interest four mineral claims adjoining the recently acquired Caledonia, Cascade and Bluebell claims (together referred to as the 'Caledonia Project'), subject to a one percent NSR (News Release October 17, 2019). This acquisition will allow for the exploration of possible strike extensions of high-grade mineralization to the east and the west from the Caledonia Project underground workings. With this new acquisition, the combined land position of the Caledonia Project contains 1,741 hectares.

The Caledonia Project is in the Nanaimo Mining District of northern Vancouver Island, adjacent to the east side of a joint venture between Freeport-McMoRan and Northisle Copper and Gold Inc. Under terms of that joint venture agreement, Freeport-McMoRan can earn up to a 65% with C$24 million in exploration expenditures over seven years. Freeport-McMoRan is currently one of the world's largest copper producers. Additionally, the Caledonia Project lies within a 50-kilometer-long copper belt and only 4 km northwest of BHP's previously producing Island Copper Mine (Canada's third-largest copper producing mine responsible for extracting 345 million metric tonnes @ 0.41% Cu, 0.017% Mo, 0.19 g/t Au, and 1.4 g/t Ag).

Relevant Historical Information: The Caledonia Project (taken from The B.C. Ministry of Energy and Mines, Minefile No 092L 209): 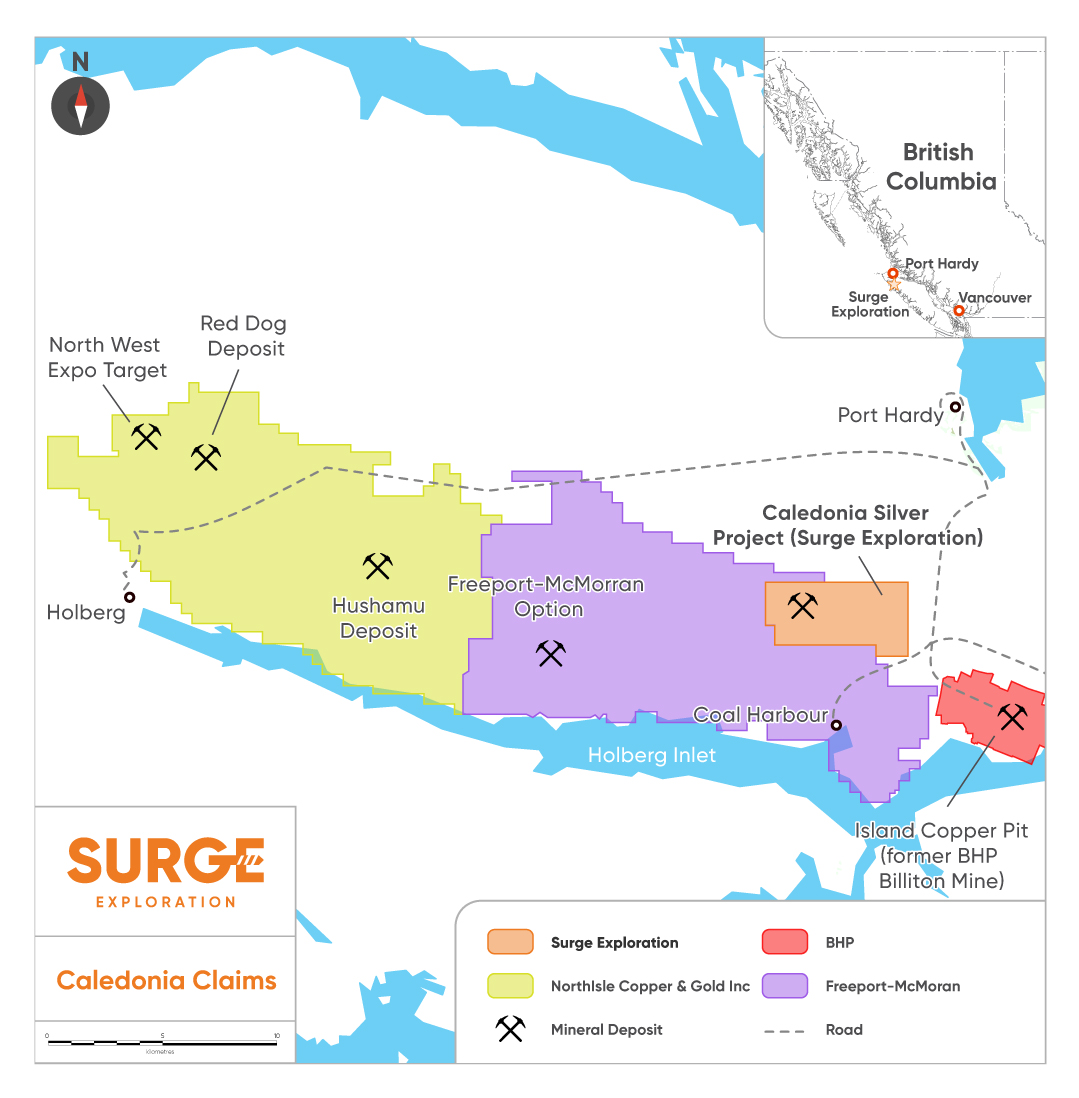 Mr. Tim Fernback, Surge President & CEO states: 'The area of our Caledonia Project has a strong history of mineral exploration, but it remains relatively underexplored, meaning there is plenty of blue-sky potential for Surge. I believe we can greatly expand on the known mineral discoveries within our Project area and this exploration potential should excite our investors.'

Subject to the terms and conditions of the Purchase and Sale Agreement dated November 1, 2019, (the 'Agreement') for the four mineral claims, Surge agrees to making a cash payment in the amount of $3,657.17 upon signing the Agreement and issuing 1,000,000 shares in the capital of the Company, subject to a 1% NSR, upon TSX Venture Exchange approval to the Transaction. Finder's fees may be paid in connection with the transaction. All shares issued are subject to a four month and a day hold period under applicable Securities Laws.

J.W. (Bill) Morton, professional geoscientist, a qualified person within the context of National Instrument 43-101, has reviewed this news release and concludes it correctly reflects information as reported in the various news releases and assessment reports from which it was derived and approves the scientific and technical disclosure cited in the news release.

The Company is a Canadian-based mineral exploration company which has been active in the resource sector in British Columbia and elsewhere in Canada.

The Company owns 100% interest in the Golden Triangle - Trapper Lake Group of 23 mineral claims which are located in the prolific Golden Triangle Region of northwestern British Columbia approximately 90 km ENE from Juneau, Alaska. Surges' staking program totals an area of approximately 325 sq. km within the regionally important geological and structural trend. A large portion of the new property is adjacent to the Thorn Project owned by Brixton Metal's Corp. ('Brixton', TSXV: BBB) with the balance covering prospective open ground containing numerous B.C. Minfile showings with Cu, Ag, Au values adjoining the boundaries of the Golden Bear Mine, a 480,000 oz Au past producer.

In Brixton's news release dated July 15, 2019 (Brixton News Release), they reported results from drill hole THN19-150, which was drilled to 829.06 metres depth at the Oban diatreme breccia pipe within the Camp Creek copper corridor. Brixton reported a drill hole intercept of 1.97 grams per tonne gold equivalent across 554.70 meters including 135.96 meters of 1.35 g/t Au, 0.31% Cu, 133.62 g/t Ag or 5.00 g/t Au eq including 6 meters of 3.56% Cu, 3.37 g/t Au, 257.77 g/t Ag. Structural mapping and soil-rock geochemistry at the Chivas zone and relogging of select core from the Glenfiddich zone were also conducted as part of the overall exploration program at the Thorn Project. Of note, mineralization hosted on adjacent and/or nearby properties is not necessarily indicative of mineralization hosted on the Company's properties.

The Company owns a 100% interest in the Omineca Group of 12 claim blocks which are located in the Omineca Mining Division of north-central British Columbia, approximately 150 km north of Fort St. James. The claims are not subject to any royalty terms, back-in rights, payments or any other agreements and encumbrances.

B.C. Minfile assessment report data indicates that most of the area covered by the Omineca Group claim blocks were at one time or another covered by staking during surges of exploration in B.C. dating from the 1940's to present day. Largely the claims appear to have been minimally explored with little follow-up. However, some work was recorded on several claims with results for stream sediment sampling showing anomalous to highly anomalous results for gold in a few areas. These areas were recommended for detailed follow-up, however due to a previous commodity price downturn no further work was recorded.

The Company has an option to earn an undivided 60% interest seven mineral tenure covering 2,418 hectares (5,972 acres) located approximately 80 km northeast of the town of Quesnel, BC and 20 km north of the historic gold mining towns of Wells and Barkerville.

The Company has an option to earn an undivided 60% interest in the Glencore Bucke Property and the Teledyne Property, located in Cobalt, Ontario Canada.

On Behalf of the Board of Directors

US to keep travel restrictions on Europe

Washington DC [US], January 26 (ANI): US President Joe Biden will sign a proclamation later in the day to keep ...