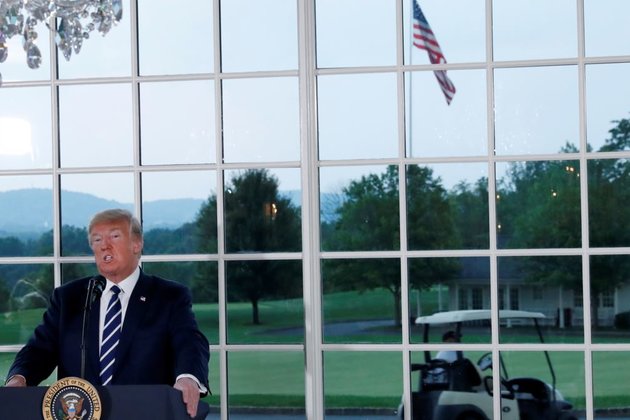 NEW YORK - Two women hired to clean at one of President Donald Trump's golf resorts in New Jersey say they were in the country illegally when they got their jobs, supervisors knew it and that many employees there also lack legal documents, according to a report in The New York Times.

A statement from their lawyer, Anibal Romero, says that a supervisor also hurled racial epithets at the women and threatened them with deportation.

The Times story says that there is no evidence that the Trump Organization knew the two did not have legal documents, but the women say at least two supervisors were aware of their status and helped them evade detection.

"We have tens of thousands of employees across our properties and have very strict hiring practices," said the Trump Organization in an emailed statement. "If any employee submitted false documentation in an attempt to circumvent the law, they will be terminated immediately."

Both women were described by the Times as finding Trump demanding, but kind. Morales, who left Guatemala in 1999, says Trump would sometimes give her a $50 or $100 tip.

But she told the newspaper that she was hurt by his comments disparaging immigrants here illegally as violent criminals. Perhaps emboldened by that talk, she says her supervisor started verbally abusing workers, calling them "stupid illegal immigrants."

She said the same supervisor, who is unnamed in the story, had provided her with forged documents.

Morales told the Times that she understood that she could be fired and deported but felt she had to speak out. She says she is applying for asylum and is exploring a lawsuit claiming workplace abuse and discrimination.

Her lawyer, Romero, has called for federal and state investigations into the matter.

"This toxic environment was designed to intimidate these women, leaving them fearful for their safety and the safety of their families," he said in a statement.

Trump has called for a crackdown on immigrants in the country illegally. In addition to calling for a wall on the Mexican border, he has urged companies to screen workers more carefully.