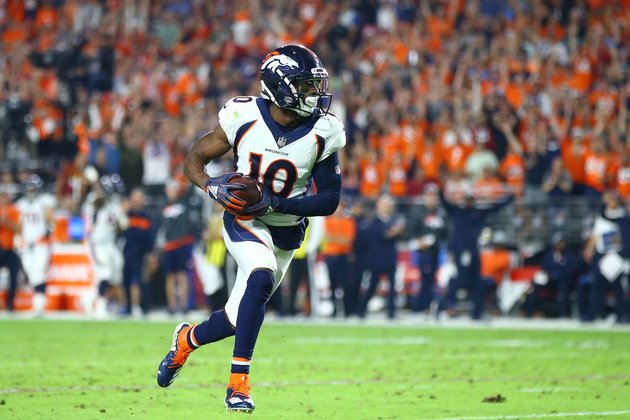 Sanders was helped to the locker room by trainers after falling to the ground on a pass play near the end of the open portion of practice.

A two-time Pro Bowl selection, Sanders leads the Broncos (6-6) with 71 receptions and 868 yards in 12 games this season. In addition to reeling in four touchdown passes, the 31-year-old also has rushed and thrown for a score in 2018.

Sanders has collected 535 catches for 7,024 yards and 37 touchdowns in 127 career games with the Pittsburgh Steelers and Broncos. He was a third-round selection of the 2010 NFL Draft by the Steelers.

Without Sanders, rookie Courtland Sutton probably will serve as the top receiving target for the Broncos, who visit the San Francisco 49ers (2-10) on Sunday (4:05 p.m. ET).

Sutton, who is listed at 6-3 and 216 pounds, has 28 receptions for 558 yards and three touchdowns this season. He was selected by Denver in the second round of April's draft.

The Broncos are no strangers to injuries, notably losing star cornerback Chris Harris Jr. to a fractured fibula in Sunday's 24-10 victory over the Cincinnati Bengals.