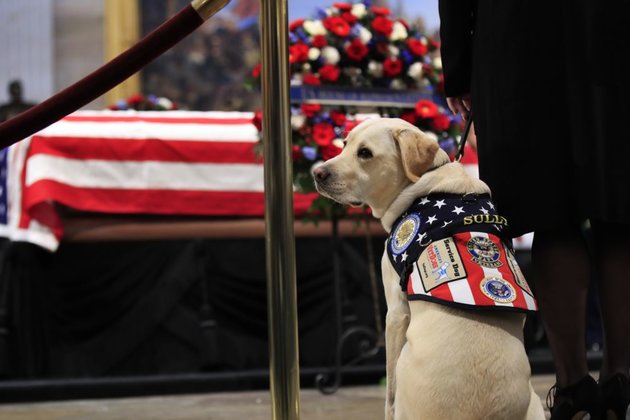 Five living American presidents will come together Wednesday to pay final tribute to George Herbert Walker Bush, the nation's 41st president, who died last Friday at the age of 94.

Former presidents Jimmy Carter, Bill Clinton and Barack Obama will join the current commander-in-chief, Donald Trump, for Bush's funeral services at the Washington National Cathedral, where they will hear a eulogy from George W. Bush, the late president's son and the 43rd president.

Also scheduled to speak at the state funeral will be former Prime Minister Brian Mulroney of Canada, former U.S. Senator Alan Simpson, and historian Jon Meacham, the elder Bush's biographer. Among the dignitaries who will be in attendance include Britain's Prince Charles, German Chancellor Angela Merkel, and Lech Walesa, Poland's former president.

WATCH: Mourners give their condolences

Wednesday's services will begin when a motorcade will deliver the ex-president's flag-draped casket to the cathedral from the U.S. Capitol, where it lay in state Tuesday as thousands of mourners filed through the Rotunda to pay their final respects. An emotional moment during the public viewing occurred when 95-year-old former Senator Bob Dole was helped from his wheelchair and saluted his fellow Republican and World War Two veteran.

After the funeral, former President Bush's casket will be taken to Andrews Air Force Base and flown back to Houston, Texas for a second and final service on Thursday. He will be laid to rest at his presidential library and museum at Texas A&M University in nearby College Station, next to his wife of 73 years, Barbara, who passed away in April, and their daughter Robin, who died of leukemia in 1953 when she was only three years old.

President Trump has designated Wednesday as a national day of mourning in Bush's honor. The New York Stock Exchange will be closed, as are most government offices.

More than 100 nations have active force of military drones

Attack on Japanese base in 1938 carried out by Soviets, not U.S.

In 1938, the Americans took credit for an unprecedented Soviet air raid on a Japanese air force base in Taiwan ...

TEHRAN (Tasnim) - China on Wednesday defended the World Health Organization and lashed out at the US decision to withdraw ...

Bullying of International court and Bank of England laid bare

On January 9, 2020, Ambassador Karen Pierce-the United Kingdom's permanent representative to the United Nations-spoke at a meeting on the ...

Countries across the globe re-thinking reopening as coronavirus surges

As coronavirus cases around the world approach 11.5 million, governments are struggling with how to reopen their economies, leading some ...

QUEZON CITY, Philippines (PIA) -- Despite the global economic recession brought about by the COVID-19 pandemic, the Philippine economy remains ...

In the past month, there's been an outpouring of support for Black Lives Matter from America's largest corporations.You might have ...