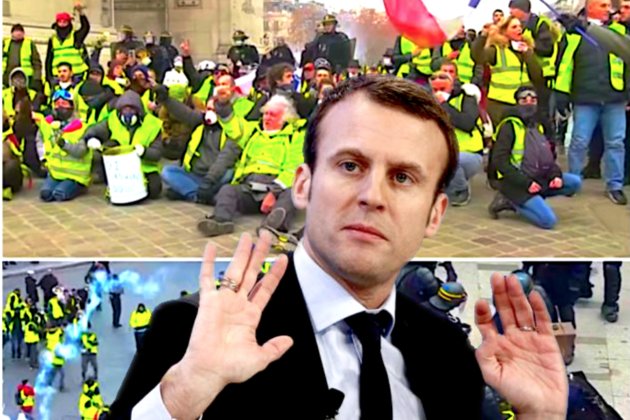 PARIS, France - In the aftermath of the worst riots witnessed in Paris since 1968, the 18-month-old French government led by the young president Emmanuel Macron announced its first big decision made under pressure from the country's infuriated citizens.

On Saturday, France witnessed the third week of protests organized by the grassroots movement called 'Yellow Vests' (gilets jaunes), over the fuel price hikes announced by Macron, as part of his campaign for cleaner cars and fuel.

However, over the last two weeks, thousands of people have taken to the streets in various parts of the country, to protest not only the gas taxes, but also to express their anger over the high cost of living in the country and the President's highly criticized policies in general.

While the first two weekend protests witnessed some stray incidents of violence, and casualties, Saturday's protests caused widespread anger and alarm, especially in the French capital.

The riots that broke out in Paris over the weekend were said to be the worst unrest witnessed in the city's central region in five decades.

Denouncing the riots, the Paris police chief Michel Delpuech said that the violence witnessed on Saturday was "on a level not seen in decades."

Police in Paris arrested 412 people, while 263 people suffer injuries across the country, including dozens of members of the country's security forces.

The alarming levels of anger and the subsequent riots that have followed forced the French government to huddle up to discuss ways to quell the protest.

Tax not worth jeopardizing nation's unity

On Tuesday, the French Prime Minister announced the government's decision to suspend the planned increases to fuel taxes for at least six months.

In response to the violent protests, Prime Minister Edouard Philippe said that anyone would have "to be deaf or blind" not to see or hear the roiling anger on the streets over the fuel tax hike policy.

While Macron has defended the plan as being critical to combating climate change, Philippe stressed, "The French who have donned yellow vests want taxes to drop, and work to pay. That's also what we want. If I didn't manage to explain it, if the ruling majority didn't manage to convince the French, then something must change. No tax is worth jeopardizing the unity of the nation."

The French Prime Minister also stressed that lawmakers would spend some time to discuss measures to help the working poor and squeezed middle-class who rely heavily on vehicles to commute.

However, he warned citizens against expecting better public services and lower taxes at the time same time.

Philippe explained, "If the events of recent days have shown us one thing, it's that the French want neither an increase in taxes or new taxes. If the tax-take falls then spending must fall, because we don't want to pass our debts on to our children. And those debts are already sizeable."

While the government had been hoping that its decision to suspend the taxes would placate fears of an outright rebellion within the country, the announcement left the 'yellow vest' movement miffed.

A spokesman for the grassroots initiative, Benjamin Cauchy argued, "The French don't want crumbs, they want a baguette.

Cauchy said that the Yellow Vests wanted a cancellation of the taxes and said that the government move was "either a disguised political snub or... to make fun of the French and put the tax back in six months."

Meanwhile, another spokesman for the group, Christophe Chalencon declared, "We're being taken for idiots."

Further, commenting on the government's decision, the Senate leader of the centre-right opposition, the Republicans, Bruno Retailleau, said the suspension was "absolutely inadequate."

Further, Macron's chief opponent in the presidential elections and far-right leader Marine Le Pen tweeting that the government's postponement of the tax, instead of a cancellation did not change much.

JERUSALEM - Twenty-seven days before the first rocket was fired from Gaza this week, a squad of Israeli police officers ...

Online out-of-state purchases to now be taxed in Missouri

JEFFERSON CITY, Missouri: The legislature passed bills on May 12 to require out-of-state online stores to collect sales taxes on ...

N.Y. university students required to be vaccinated before enrolling

NEW YORK CITY, New York: The 435,000 students enrolled at the State University of New York and the City University ...

WASHINGTON D.C.: Overseas Americans are urging U.S. officials to make Covid vaccinations available to them at U.S. embassies. As the ...

Israel fired artillery and mounted more air strikes on Friday against Palestinian militants in the Gaza Strip amid constant rocket ...

SEATTLE, Washington: Alaska Airlines announced on May 12 its purchase of 13 737-9 MAX aircraft from Boeing, as well as ...

SAN BRUNO, California: Alphabet Inc's YouTube has announced it will launch a $100 million fund to pay content creators whose ...

BEIJING, China: A group representing U.S. business interests in China has demanded that China end what it calls its "implicit ...

Tech stocks all the rage on Wall Street, Nasdaq gains more than 2%

Tech companies join together to seek funding for chip manufacturing