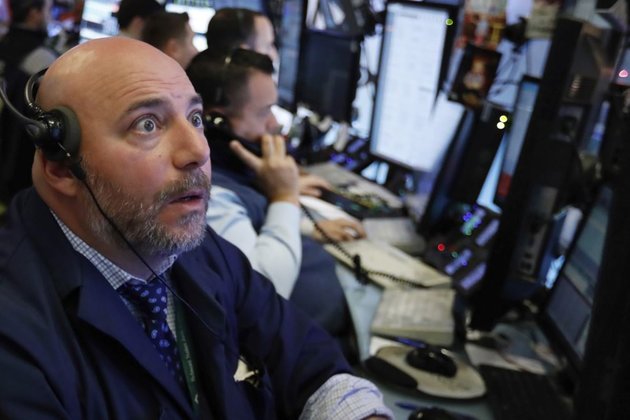 Wall Street fell more than 2 percent on Tuesday, led by bank stocks as a flattening U.S. Treasury yield curve set off warning lights about slowing growth and on fading hopes of a speedy resolution to the U.S.-China trade spat.

The declines, which put the benchmark S&P 500 on course for its biggest one-day percentage drop in six weeks, more than erased Monday's gains after Beijing and Washington agreed to a 90-day truce to iron out their trade differences.

Yields on two-year and three-year bonds held above the five-year yield for a second day, while the benchmark 10-year yield hit its lowest since mid-September as demand for longer-dated Treasuries rose on bets of an approaching economic slowdown.

The focus now is on the spread between the two-year and 10-year yields, currently at its narrowest in over a decade and whose inversion has preceded the past three U.S. recessions.

'Historically there is a good correlation between the yield curve inverting and the timing of the next recession and the bond market has been a big focus for today,' said Binky Chadha, chief strategist at Deutsche Bank in New York.

The technology sector fell 2.80 percent, while industrials dropped 3.47 percent over a lack of specifics on the Sino-U.S. trade truce, including no written commitments and when the truce period starts.

'As soon as investors digested the information from the discussions, they focused on the uncertainties and lack of details,' Ryan Nauman, market strategist at Informa Financial Intelligence in Zephyr Cove, Nevada said.

Trade bellwethers Boeing Co's 3.6-percent drop and Caterpillar Inc's 5.7 percent retreat weighed the most on the Dow, while twin declines of 3.7 percent in Amazon.com Inc. and Apple Inc. dragged on the Nasdaq and S&P.

Amid fears of slowing U.S. growth, Dollar General Corp sank 8 percent after warning that the proposed tariffs on Chinese imports could begin to have a greater impact on its business as well as its customers.

The U.S. stock and bond markets will be closed on Wednesday to mourn the death of former U.S. President George H.W. Bush.

WASHINGTON, DC - Under siege in the White House, President Donald Trump is aggravating America's latest racial anguish in a ...

JERUSALEM - Israel's defense minister apologized on Sunday for the Israeli police's deadly shooting of an unarmed Palestinian man who ...

DUBAI, UAE - The Dubai government is to relax restrictions on wearing face masks in public.Until Sunday, everyone regardless of ...

Something is Deeply Wrong in the American Psyche

Americans continue to shun use of masks

ALEXANDRIA, VIRGINIA - At a grocery store in Alexandria, Virginia, customer Laura Shafor was dismayed about a couple who weren't ...

NEW YORK, New York - U.S. stocks made modest gains on Monday, kicking off a new week, and month.With the ...

CO CORK, Ireland - A U.S. manufacturer of essential oils, health and wellness products is developing a manufacturing plant near ...

Dubai getting back to business after lengthy break

DUBAI, UAE - Malls throughout Dubai are slowly building their business after being dormant for some weeks due to the ...

SYDNEY, Australia - Stocks in Asia rallied sharply on Monday, as the U.S. dollar crumbled. The big winner on equity ...

News Corp's closing of its community and regional papers, with few remaining and others online-only, cancels centuries of beliefs about ...