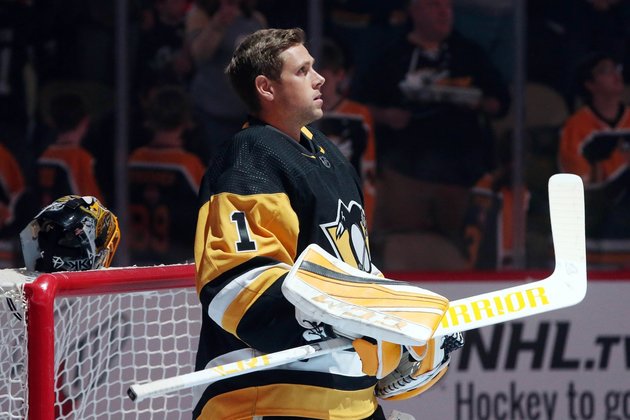 It's a game that might have been circled by many far in advance because of one particular matchup -- Vegas Golden Knights goaltender Marc-Andre Fleury against his former club and his former teammate, Pittsburgh Penguins goaltender Matt Murray.

Now, neither is expected to start Thursday when the teams play at PPG Paints Arena.

Fleury, the one-time Pittsburgh franchise goalie who made an emotional return in February in a 5-4 Penguins win after the Golden Knights plucked him in the 2017 expansion draft, instead started Wednesday at Washington.

In a rematch of the Stanley Cup final in June, the Golden Knights (1-3) lost to the Capitals 5-2.

"I don't think it was our best game, and I think there are a lot of things that we can tighten up, and awareness is something we can do a much better job (of)," Vegas' Reilly Smith said.

Fleury, who made 24 saves, is not expected to make back-to-back starts.

Murray, meanwhile, sustained a concussion in practice Monday, his second concussion this calendar year and third of his NHL career. Because of the unpredictable nature of concussions, it is unknown how long he will be out. He has not practiced since getting hurt.

So what was the big matchup instead will be Pittsburgh backup Casey DeSmith against Golden Knights backup Malcom Subban.

Fleury's return this time is a bit muted by his expected spot on the bench.

"I think that probably plays into it, and the fact that he's played here once already," Pittsburgh captain Sidney Crosby, a longtime close friend of Fleury's, said, adding that Vegas is still a challenging opponent.

"They're a team that had a great year last year, have a lot of confidence built because of that. For us, not having played a lot of games so far this year, we're just trying to find our game a bit and get some momentum."

The Penguins (1-1) have no trouble turning their attention instead to their performance. They have given up 11 goals in two games and were particularly dismayed with their performance in a 5-1 loss Saturday against Montreal.

Since that loss, the team has had three practices to work on things, including one that lasted an hour that winger Jake Guentzel called "high intensity" with most players remaining on the ice at least another 30 minutes, and another not originally scheduled.

"I hope we respond the right way," Pittsburgh coach Mike Sullivan said. "My commitment to them is to be straightforward to them.

"We certainly weren't pleased with the effort that we had in the last game. We're trying to identify areas where we need to improve, and we spent three days working on those areas."

Concentrating on one's own team is fine with Vegas, a marked opponent this season as the defending Western Conference champion.

"One thing that we have to (do is) stop talking about last year," the Golden Knights' Jonathan Marchessault told The Athletic. "It's a new year now. Last year is over. It's a new team."