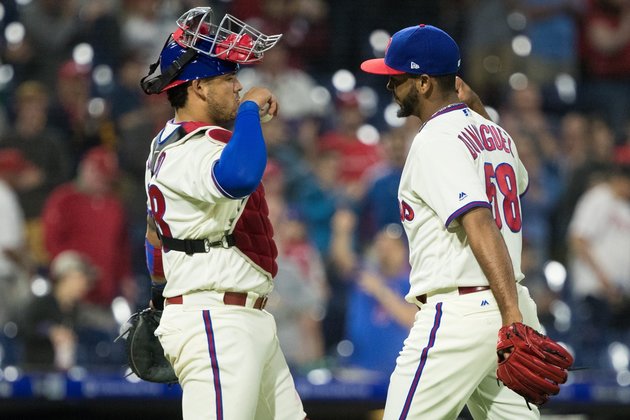 Nick Pivetta is hoping to get back on track as the Philadelphia Phillies go for their first series win in three weeks.

Pivetta will take the mound to face left-hander Tyler Anderson and the Colorado Rockies on Wednesday night at Citizens Bank Park.

A right-hander, Pivetta (4-5, 3.76 ERA) has a 5.79 ERA over his last three starts and opponents are hitting .294 against him in those games. Pivetta picked up a loss in all three of those outings, including last Thursday when he gave up four earned runs on six hits in five innings against the Cubs.

Pivetta made one start against the Rockies in his two-year major league career, and it did not go well. He allowed eight runs in 2 2/3 innings on Aug. 5, 2017 at Coors Field.

The Phillies held on for a 5-4 win in the series opener against the Rockies on Tuesday night and got a 10-strikeout performance from right-hander Aaron Nola and a four-RBI night from Scott Kingery. The win was the second in a row for the Phillies (34-30), marking the first time since May 16-17 that they won back-to-back games.

If they win one of the next two against the Rockies, the Phillies will have their first series win since taking two of three from the Braves on May 21-23.

The Rockies, meanwhile, are on a five-game losing streak. It's their longest skid of 2018 and the worst losing streak the team has had since it lost eight straight games from June 21-28 in 2017.

Anderson (3-1, 4.81 ERA) is coming off one of his best starts of the year. He matched his season best with seven innings and gave up just two runs on five hits to the Reds while striking out five.

"That was a very solid outing," Rockies manager Bud Black told MLB.com of Anderson after the start. "I thought the changeup was really effective. He commanded the fastball well."

Anderson has previously faced the Phillies three times in his career and is 1-1 with a 3.94 ERA and 1.313 WHIP.

Anderson will face Kingery, a rookie, for the first time in his career. Kingery has been the Phillies' everyday shortstop for the past two weeks and his four RBIs on Tuesday night tied a career high.

Kingery's batting average is only at .215 through 200 at-bats this season, but he's had multi-RBI games twice in his last five contests.

"That's how you want to start a series, especially against a good team like this," Kingery, who hit a three-run homer in the first inning, told NBC Sports Philadelphia after the win. "You want to be the first team to score. Nola did a great job right before that. This kind of gives us some momentum."