Eagles RBs coach: Ajayi is the guy in backfield 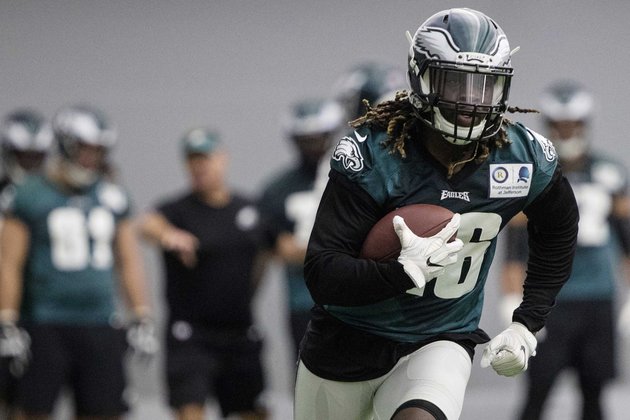 Jay Ajayi is expected to be featured in a more prominent role in the Philadelphia Eagles' backfield, per running backs coach Duce Staley.

Ajayi found himself splitting carries in 2017 after the Eagles acquired him in an in-season trade with the Miami Dolphins. The 24-year-old rushed for 408 yards on 70 carries in seven regular-season games with the Eagles before adding 184 more in three postseason tilts.

While LeGarrette Blount has since moved on to the Detroit Lions, Corey Clement is now joined by Darren Sproles after the veteran speedster's return from a torn ACL. Wendell Smallwood and Donnel Pumphrey are also in the mix while former Washington Redskins running back Matt Jones was added to the team as well.

Ajayi showcased the workhorse mentality during the 2016 season in Miami. He rushed for 1,272 yards and eight touchdowns as the Dolphins punched a ticket to the postseason for the first time since 2008.

The 6-foot, 223-pound Ajayi didn't get out of the blocks as fast in 2017, leading to a midseason trade with the Eagles for a conditional fourth-round pick in the 2018 NFL Draft. The Miami Herald reported that Ajayi was jettisoned because of "team culture, locker room chemistry and player buy-in."

Ajayi had rushed for 465 yards on 138 carries, but had been held out of the end zone with Miami.